Students Reflect on Having Parents Who Are Faculty Members 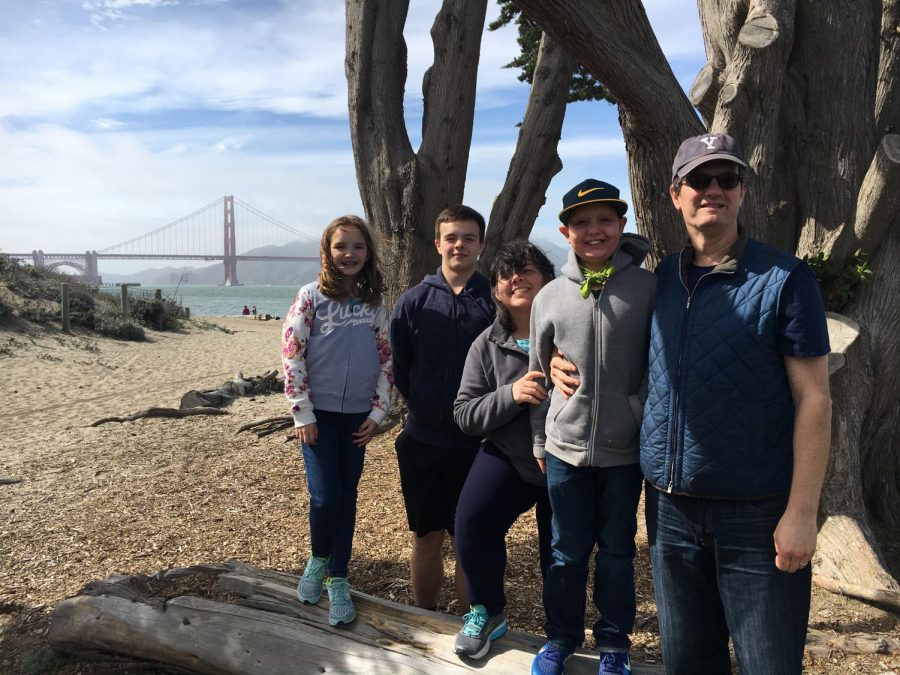 Charles and Katharine Hanson pose for a photo with their three children. Photo courtesy of John Hanson.

For the typical Menlo student, school is the time when communications with their parents are put on hold, and their parents are barely a factor at all in their daily school life. However, for the students who have parents who are faculty members, their situation is different.

One might expect that having their parent as a faculty member would be annoying or upsetting; however, junior Miles Hester thoroughly enjoys having his dad, Malloy Hester, on campus. Mr. Hester has been working primarily as an Upper School basketball coach at Menlo for nine years, and he also helps out with other teams in the Middle School. Miles appreciates having his dad around because he feels like he has someone he can trust at school with him at all times. “My favorite part about having my dad on campus is that it feels like there’s another me who understands what’s going on,” Miles said. “We have a lot of charismatic energy when we’re together.” Miles never felt like the Menlo community has ever treated him differently due to his dad’s role at the school. “I’ve only received copious amounts of positive energy, whether that be from my fellow students or my teachers.” Miles said.

Junior John Hanson and freshman Peter Hanson has two parents who both work in the history department, Charles Hanson and Katharine Hanson. Although John has never taken a class from either of his parents, he feels their presence at school. “It’s definitely different because when you’re at school, they’re at school, and when you’re at home, they’re at home. But I don’t feel like our relationship is any worse for it.” John feels the only time it feels somewhat awkward is when he hears about his parents from his peers. “You hear them being talked about like teachers, in a totally different way than you think of them, because they’re your parents.” One of John’s favorite things about his parents being at the school is the convenience. He often rides with them to and from school, and they can help him out of he forget something. “If I need a form signed, I can just go to one of their offices and ask.” John said.

Junior Sydney Bianchi, whose mother, Tracy Bianchi, is an Upper School counselor, feels that her mom respects her space at school. “She tries to separate her work from my school,” Sydney said. However, during the start of high school, Sydney felt that her relationship with her mom felt a little weird. “I would say freshman and sophomore year our relationship wasn’t very strong because I kind of avoided her and I found it awkward that she was both a counselor and my mom. Kids would come to me and ask for advice like I was a counselor, and I guess I resented my mom for that.” Over the course of her schooling at Menlo, however, she has grown to appreciate her mom as an asset on campus. “This year has been really nice having her there for me, I can come into her office after school and do work if I need to and now I feel like we’re very close because I see her all the time.” Sydney said.

Senior Will Buxton doesn’t really feel that his mom, Upper School science teacher Tanya Buxton, puts any strain on their relationship by teaching at Menlo. Will has been going to school where his mother taught even before Menlo; Ms. Buxton taught at Will’s elementary school before coming to the Upper School. “I don’t feel like we need to separate our work and our relationship, I just don’t see the need. We haven’t really had any issues.” Similar to John Hanson, Will enjoys the convenience of having a parent on campus. “I get free rides to school and I can study in the car, which is really nice.” Will said. His friends joke around with him about his mom being a teacher at the school, but Will has never felt anything but positivity towards his mom’s role at the school. The relationships with kids at Menlo and their parents as teachers extend further into the community with other families that face the particular dynamic as well.