The Coat of Arms • September 18, 2019 • https://menlocoa.org/18038/news/resident-trump-visits-palo-alto-for-campaign-funding-luncheon-meets-both-support-and-protest/ 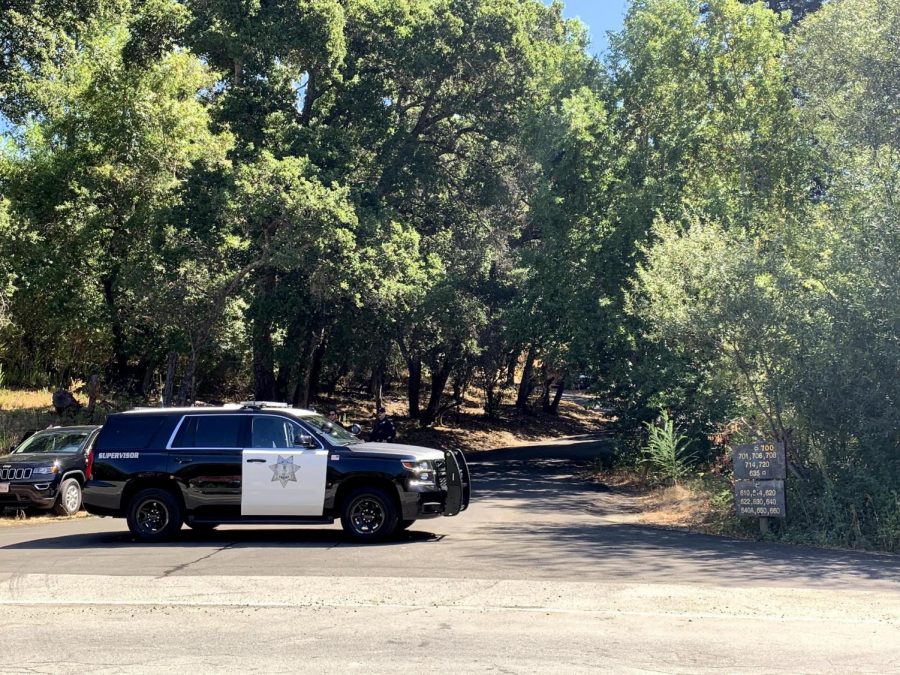 President Donald Trump visited a private home in the Palo Alto Foothills on Tuesday, Sept. 17 for a campaign-funding luncheon. The visit marks Trump’s first time in the Bay Area since being elected president, and his arrival was met with near-constant protests for the entire duration of his three-hour visit to the Peninsula.

Police cars and motorcycles lined Alpine road and blocked the I-280 on and off ramps, directing traffic around the event.

About 200 members from protest groups known as the Raging Grannies, the Backbone Campaign and Vigil for Democracy were gathered along Alpine Road at Rossotti Field, just down the street from the luncheon, with signs calling for Trump’s resignation or impeachment.

Small pockets of protesters, as well as supporters of the President, also gathered closer to the luncheon itself, just outside a police checkpoint on Los Trancos road. One supporter, Union City resident Kenny, mentioned he had been planning to make it out to support the President ever since the fundraiser was announced. “I knew that I probably couldn’t afford to attend the event itself, but I definitely wanted to make it out and at least show my support from the outside,” Kenny said. Before demonstrating on Los Trancos road, Kenny had been at Moffett Airfield, where a greater number of Trump supporters had been gathered to greet Trump upon his arrival. “There was a good crowd there, but out [in Palo Alto] there aren’t that many of us.”

At Rossotti field, anti-Trump demonstrators gathered in greater numbers, holding signs and flying a baby Trump balloon from the parking lot of the Alpine Inn, a local lunch spot. The owners of the balloon, the Backbone Campaign, are a protest group that specializes in large art pieces, such as balloons or light installations. “We wanted to protest him because he has violated so many of our values, not only as Americans, but in California we care a lot for our neighbor, we care for immigrants and refugees, and we want to make sure that people are protected,” Backbone Campaign member William Johnson said. “Trump has done a lot of damage to our American government and to our institutions.” Other protestors included local students and residents who came to voice their discontent with the Trump administration.

On Sept. 3 Politico reported that Trump would be hosting a fundraiser in Atherton, but that was refuted by Atherton Police Chief Steve McCulley in a Sept. 13 email. The details of the trip were not finalized until Sept. 16, according to Conservative Daily News.

McNealy has said that he self-identifies as a “raging capitalist” and has outspokenly supported Trump since early on in his presidency, making him one of the few Silicon Valley executives to do so, according to CNBC.

McNealy donated close to $40,000 to the National Republican Congressional Committee in 2016 but has only contributed to House Speaker Paul Ryan’s campaign in recent years, according to CNBC.

Even though California is a deep blue state, Trump raised $3 million at the Palo Alto Foothills luncheon alone, with tickets ranging in price from $1,000 to $100,000, according to Yahoo.