The Coat of Arms • December 1, 2019 • https://menlocoa.org/18288/news/menlo-hosts-body-image-and-mental-health-advocate-victoria-garrick-to-start-conversation-about-body-positivity/ 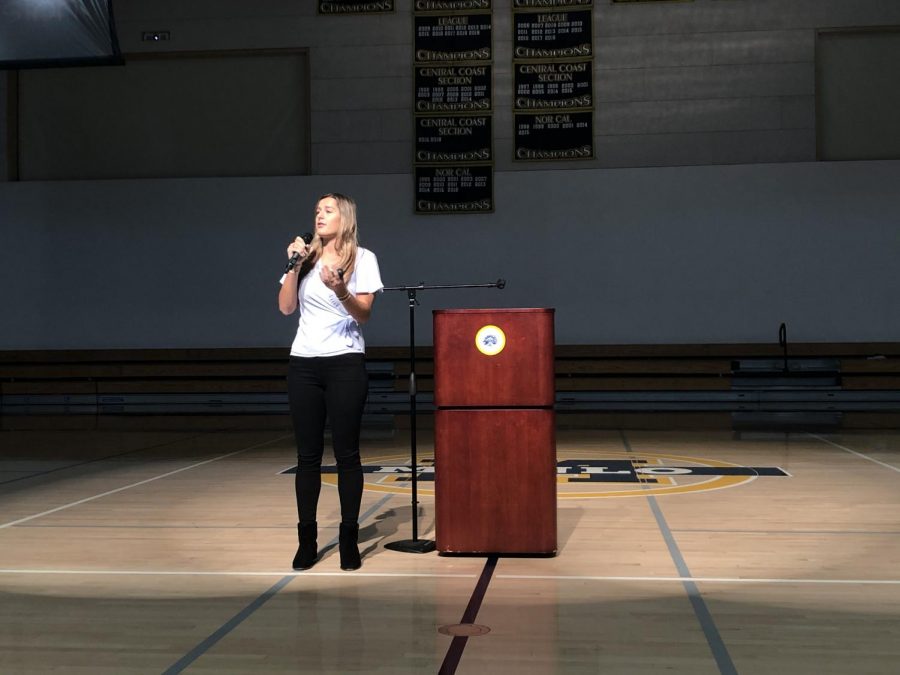 At an assembly on Nov. 19, Menlo students heard Sacred Heart graduate and former USC volleyball player Victoria Garrick talk about her experiences with depression, anxiety and a binge eating disorder. Garrick discussed how factors such as social media and being in an extremely competitive environment contributed to her challenges, and how she was eventually able to overcome them. Garrick’s speech came after two Menlo seniors, Adley Vogel and Olivia Velten-Lomelin, shared their own experiences with eating disorders. The assembly was followed up with a question-and-answer session with Garrick during lunch that was attended by over 50 students. The assembly and lunch discussion was planned by the student-run club Body Positivity Alliance.

Senior Kendall Weingart, one of the students who started the alliance, wanted to bring Garrick to speak because she thought Garrick’s message was an important one for Menlo students to hear. “We need to have more conversations about this. I feel like it’s something nobody talks about […] [There were around 50 people] at the lunchtime discussion, and to me, that just shows how important of a conversation it is to have at Menlo and how many people resonated with what Victoria is talking about,” Weingart said. Velten-Lomelin, who is also a member of the alliance and was involved in bringing Garrick to speak, explained that the alliance “wanted to bring in [an assembly] topic about body issues because it’s no secret that it’s a huge problem at our school.”

Velten-Lomelin, who discussed her own experience with anorexia decided to share her story to help students who may be facing similar problems. “I really just wanted to express to anyone who’s going through that process that first of all it was okay. And second of all, it doesn’t have to be that way.” She also wanted to emphasize how crucial it is to look out for friends who might be struggling. “It’s incredibly dangerous to have an eating disorder, especially as it goes on, and it’s important to watch out for your friends in that sense.”

Velten-Lomelin hopes that the assembly showed students that small comments can have a large impact on others. “Just the little comments that people make that Victoria was talking about […] like ‘oh my god I feel so fat,’ or ‘oh my god I’m a pig I haven’t worked out in a week.’ For all those comments someone is listening, and you don’t know what the internal monologue going on in their head is,” Velten-Lomelin said, “I would really really hope that people just become a little bit more aware of how their words affect people, even if their intentions aren’t bad.” In addition, she hopes that the assembly helps students realize that they need to become more accepting of different body sizes. “Everyone’s body is different … We just have to broaden our perspective of what beautiful actually means. […] We need to understand that our range for attraction expands so much more than just the stereotype.”

The Body Positivity Alliance started out as a group of students who wanted to bring Garrick in to speak, but the group decided to become an official club at the suggestion of Upper School Counselors Tracy Bianchi and Jake Fauver to keep up discussion around the topic. Some of the goals of the club include“making [body image] less of a stigmatized issue to talk about, and have it be more incorporated in the classroom,” according to Weingart. The alliance’s main objective, however, is to ensure that the issues surrounding body image continue to receive attention at Menlo. “The objective is to not just end there [with Garrick’s speech] […] We formed the Body Positivity Alliance to include more people in the discussion, and to keep the conversation going,” Weingart said.