The Coat of Arms • February 10, 2020 • https://menlocoa.org/18461/sports/girls-soccer-girls-boys-basketball-face-rival-night-against-shp/ 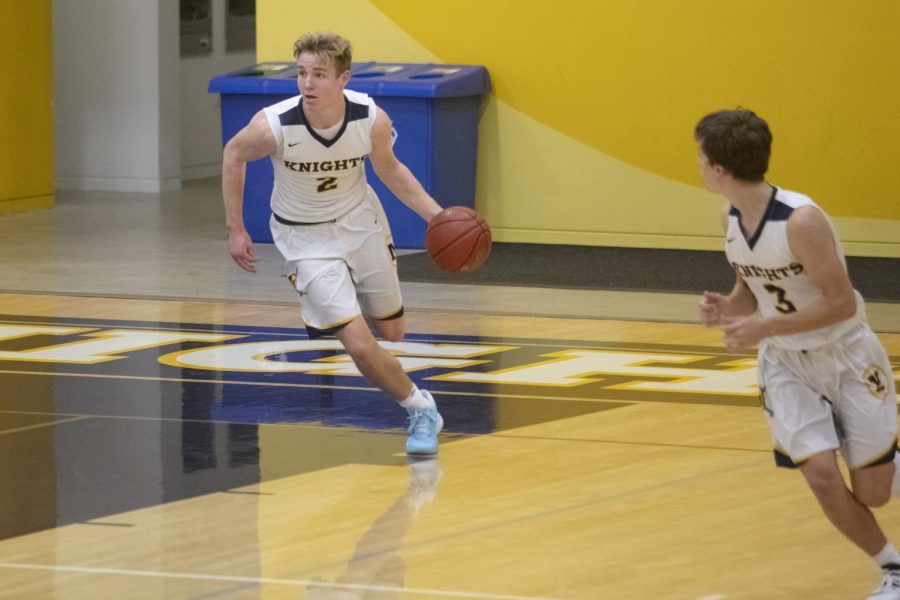 Three different varsity sports teams competed in a heated rival night against SHP on Friday, Feb. 7. Menlo students decked out in gold attire at school and the games to show their support for their fellow Knights. The Valpo showdown concluded with a tie for girls soccer, a win for girls basketball and a loss for boys basketball.

The girls soccer team kicked off the afternoon with their 3:30 game at Prep. Although neither team took the victory, the final score being 0-0, the game was hard-fought on both sides. “Even though we tied and I was looking for a win for my last game against Sacred Heart, I am really proud of how we played, and in my mind I counted as a win. We completely dominated them specifically in the first half, with several breakaways,” senior captain Sidney Peña said. Peña also explained that the team has recently endured multiple injuries and illnesses, which was unfortunate heading into this rival game. “But that is another reason why I am so proud of the teams performance yesterday, because I know everyone gave they’re 110% till the last whistle blew,” Peña said.

Following the soccer game was girls basketball. The team secured a large 54-30 victory over Prep, finding redemption from their previous overtime-loss to the Gators on the road. Sophomore Sheron Nejad tallied the most points of the game with 18. Senior Maeia Makoni posted 14 points, with three three-pointers, and junior Avery Lee had 10 points. To honor National Girls and Women in Sports day this past week, halftime consisted of a short scrimmage with girls from the Menlo Middle School.

The night for girls basketball was more than just the game itself, but a celebration of both team and individual honors. Following their victory, the Knights acknowledged Lee’s success of hitting 1000 points in her three years thus far on the team. Additionally, the team received recognition for their 2019 State Championship victory, having a ring ceremony during halftime of the boys game.

The boys team finished off the night in a tight, competitive game. Energy was soaring from fans, with both sides of the gym bleachers filled by Menlo and Prep supporters. The Menlo Knights and Midknights dancers performed in between the third and fourth quarters, further boosting student spirit on the Menlo end. The Knights trailed for the duration of the game, briefly taking the lead in the third quarter with a layup by senior Cole Kastner, who posted a total of 22 points, followed by a three-pointer by sophomore Garret Keyhani. Junior Davis Mead had an impressive showing, with nine points and three steals for the Knights. The fourth quarter looked hopeful for the Menlo boys, as they had come back from a significant deficit to narrow Prep’s lead to 58-57 with just 20 seconds left in the game. However, in the end, the Knights fell 62-57, marking their first league loss of the season. They currently share the top ranking in the WBAL with Prep.

After an exciting night of Menlo athletics, teams prepare for the rest of their league games.