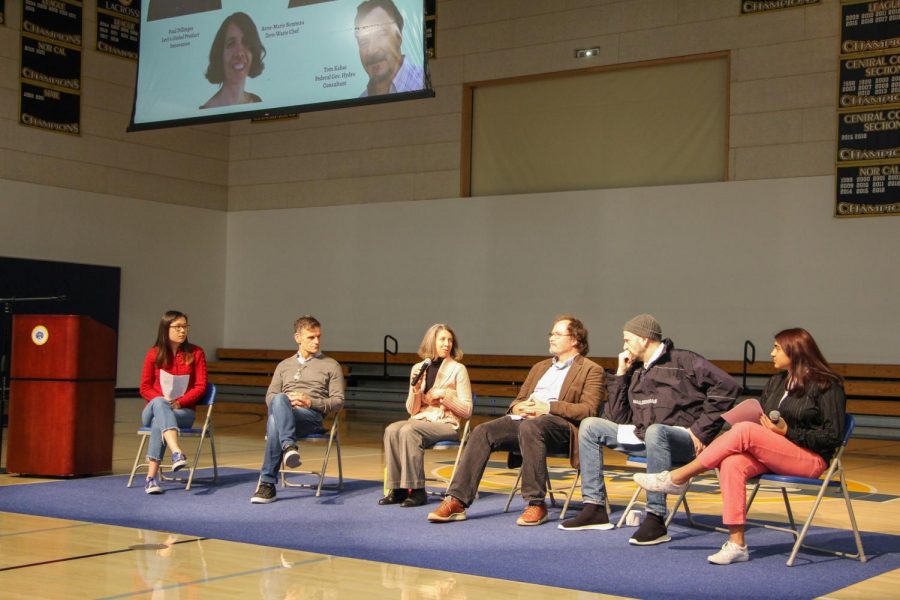 Anne-Marie Bonneau, Paul Dillinger, Tom Kabat and Dennis Woodside speak at assembly on a variety of topics relating to sustainability, such as fast fashion and the meat industry. Staff Photo: Sadie Stinson.

During the week of February 3-7, Menlo School students had the opportunity to engage in various activities relating to sustainability and climate change. The week, which was organized by students Angel More and Alix Borton, had a different theme each day, ranging from raising awareness to exposing students to more sustainable food practices. Students had the opportunity to listen to various guest speakers and participate in activities such as writing letters to their representatives. 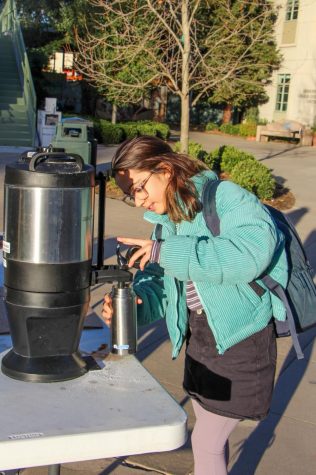 Sixth grader Nuria Sadri pours herself hot chocolate using her reusable mug. Every day, students were offered vegan hot chocolate if they brought a reusable mug to a table located in front of the student center. According to Angel More, one of the co-creators of Eco Act week, “Beyond giving Menlo Students something warm to drink in the morning, we also wanted to help students build a habit of bringing their own reusable cups.” 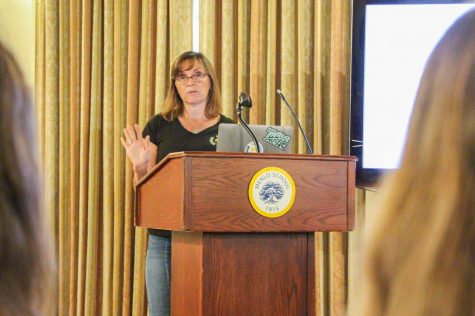 Shell Cleave, founder of the Sea Hugger Foundation, gives a lunchtime talk to students about sustainability and ocean pollution. Sea Hugger is a nonprofit organization aimed at protecting marine environments from plastic pollution through education. In her presentation, Cleave gave students several ways they could become more sustainable, such as buying in bulk and reducing their single-use plastics. 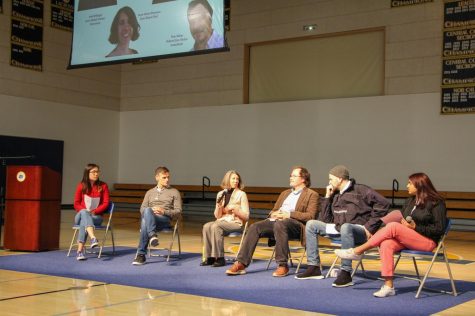 Anne-Marie Bonneau, a zero-waste chef, speaks at a sustainability panel during Tuesday’s assembly. Other panelists include Paul Dillinger, head of Levi’s Global Product Innovation, Tom Kabat, a Federal Government Hydro Consultant, and Dennis Woodside, President of Impossible Foods. Panelists spoke on a variety of topics relating to sustainability, such as fast fashion and the meat industry. 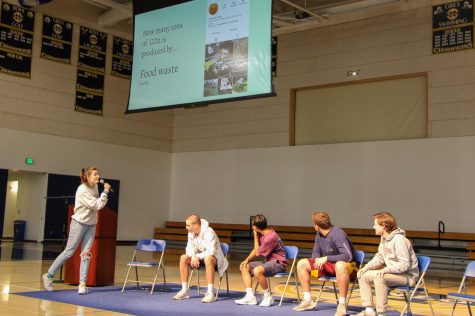 Assemblies Coordinator Emma Dressel reads aloud a question pertaining to carbon emissions produced by food waste. According to Angel More, “We wanted to show – kind of with a surprise factor – how much carbon is put out into the air but everyday/popular events and things.” Senior James Kinder correctly guessed the most answers and won free coffee given to the senior grade on Friday. 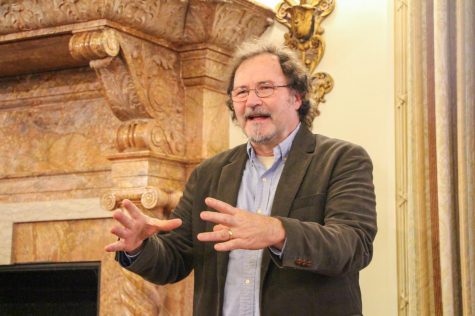 Federal government hydro consultant Tom Kavat explains to students the process of putting solar panels on a house. In his lunchtime talk, Kavat discussed the benefits of using solar panels on your house and informed students about his work with SunWork, a nonprofit that installs solar electricity systems. 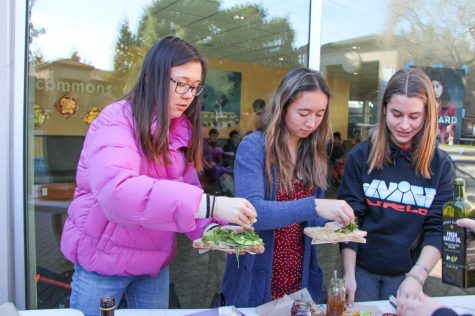 Juniors Alix Borton, Gabby Kogler and Ella Forese prepare zero-waste toasts at a toast sale on Wednesday. Borton baked a majority of the bread herself, and the rest of the ingredients were plastic free. “The toast bar went super well, we raised $283! All proceeds went towards offsetting Menlo’s carbon footprint. We are definitely going to bring the idea to the Climate Coalition and raise money for other causes since people seem to love it, and I love baking bread,” Borton said enthusiastically. 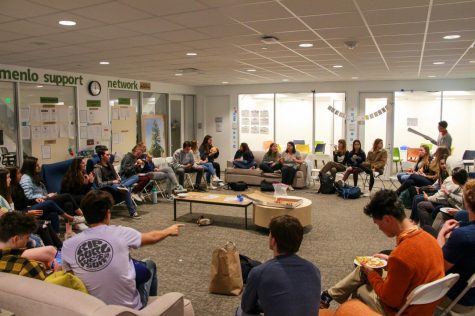 Menlo students discuss climate change and its impact on Menlo at a Chat’n’Chew on Thursday. Over 30 students attended the Chat n Chew, and conversation topics ranged from Meatless Mondays to individual obligations to reduce our carbon footprint. “I thought the discussion was successful in that the environment felt very open and welcoming; people shared varying perspectives on the most reasonable and productive ways for individuals and the Menlo administration to address climate change,” said  Chat’n’Chew member Madeline Levin. 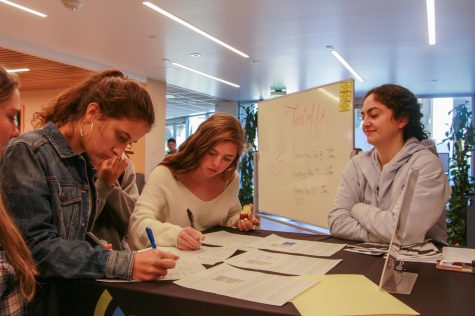 Juniors Lindsey Ball and Alta Knuff sign petitions created by the Citizens Climate Lobby, a nonpartisan nonprofit focused on creating national policies to address climate change. The petitions ask the government to pass the Energy Innovation and Carbon Dividend Act, a policy that would put a fee on fossil fuels such as coal, oil and gas. 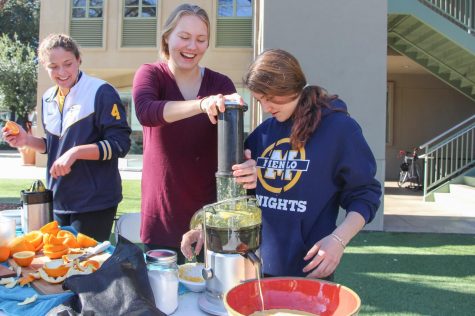 Senior Sonya Lebedeva and junior Carly McAdam make fresh orange juice at the Climate Fair on Friday. Members of Garden Club used fresh oranges and lemons grown at Mr. Healy’s house to make the orange juice and lemonade. Also in appearance at the fair were members from Recology, a company that collects and disposes of solid waste, and Menlo Spark, a local nonprofit working to help Menlo Park become climate neutral by 2025.