The Coat of Arms • March 24, 2020 • https://menlocoa.org/18621/a-and-l/with-increasing-demands-for-sustainability-menlo-contemplates-adding-more-solar-panels-around-campus/ 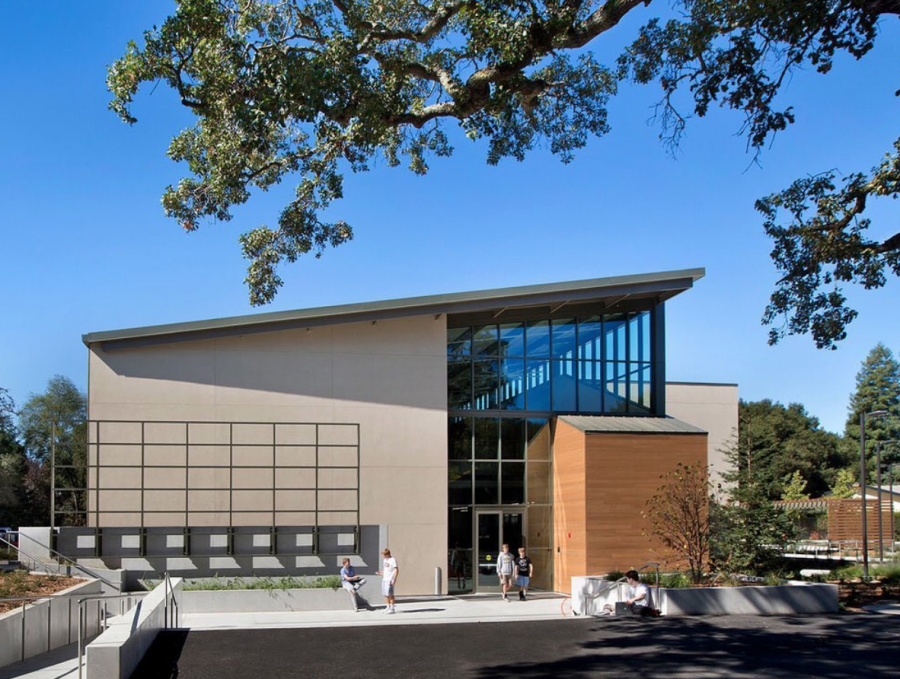 The Creative Arts and Design Center finished construction in 2012 and was designed to contain solar panels. Photo Courtesy of Climate Coalition.

On Dec. 19, 2019, the Menlo Climate Coalition posted a photo of the Creative Arts and Design Center (CADC) on their Instagram. The caption read, “Did you know that the CADC was designed to have solar panels on it? You can see by the tilted roof facing southeast it was designed precisely for solar panels.” The rest of the caption stated that the energy branch of the Climate Coalition would work to convince the Menlo administration that solar panels should be installed.

The CADC was finished in 2012, and as pointed out by the Climate Coalition’s Instagram, it was designed to contain solar panels. To Menlo faculty involved in the construction, this seemed like the most convenient decision. “They had to figure out how to orient the building anyway,” Director of Sustainability Kevin Conner said.

Despite the Climate Coalition’s claim that they were pushing to have solar panels installed on the building, there are currently no solid plans to do so. “I think there would need to be a coordinated effort between students, administration and parents to say, ‘this is something that we want,’” Conner said.

One of the leaders of the energy branch of the Menlo Climate Coalition, junior Ishi Sood, says that the administration’s reaction has been mostly positive. “The idea of solar panels on the CADC was originally shut down because [Director of Operations and Construction Loren Arms] didn’t want the panels to get in the way of any roof problems. However, recently […] the possibility of panels has reopened, and the administration will investigate if it’s possible to install solar panels on the CADC,” Sood said in an email to The Coat of Arms.

To clarify the initial rejection of the solar panels, Arms spoke about roof maintenance. “The CADC’s roof is now about 7 or 8 years old. The concern is putting solar panels on the CADC and then needing to remove them to repair or replace the roof in another 10 years or so,” Arms said in an email to The Coat of Arms.

When the Menlo Athletic Center was built in the 2009-2010 school year, solar panels were immediately installed. These solar panels have been providing electricity to not only the Athletic Center, but also to the CADC. The solar panels power provide about 30% of both of the building’s energy daily. Arms has access to a website where the solar statistics are shown daily. For example, on Mar. 4 2020, 31% of energy was offset by solar and 232 kWh were produced.

“[On the roof of the Athletic Center] the complete solar array is made up of 308 panels which together make up a 70.84 kW (Direct Current) system,” Arms said. Menlo has an agreement called the Solar Power Purchase Agreement with Menlo’s solar panel provider, SolarCity, which is owned by Tesla. “We did not pay [for] the panels, but we have agreed to purchase the power generated. These agreements are fairly common in the solar space.” According to a collection of invoices from SolarCity, Menlo pays about $3,000 per month for the solar panels. The cost ranges depending on the time of year. The sunnier a month it is, the more energy the solar panels produce, the more money Menlo has to pay. The most expensive month in 2019 was August, where the solar panels cost $4,560.75.