Behind the Mask: Kelly Sanderson 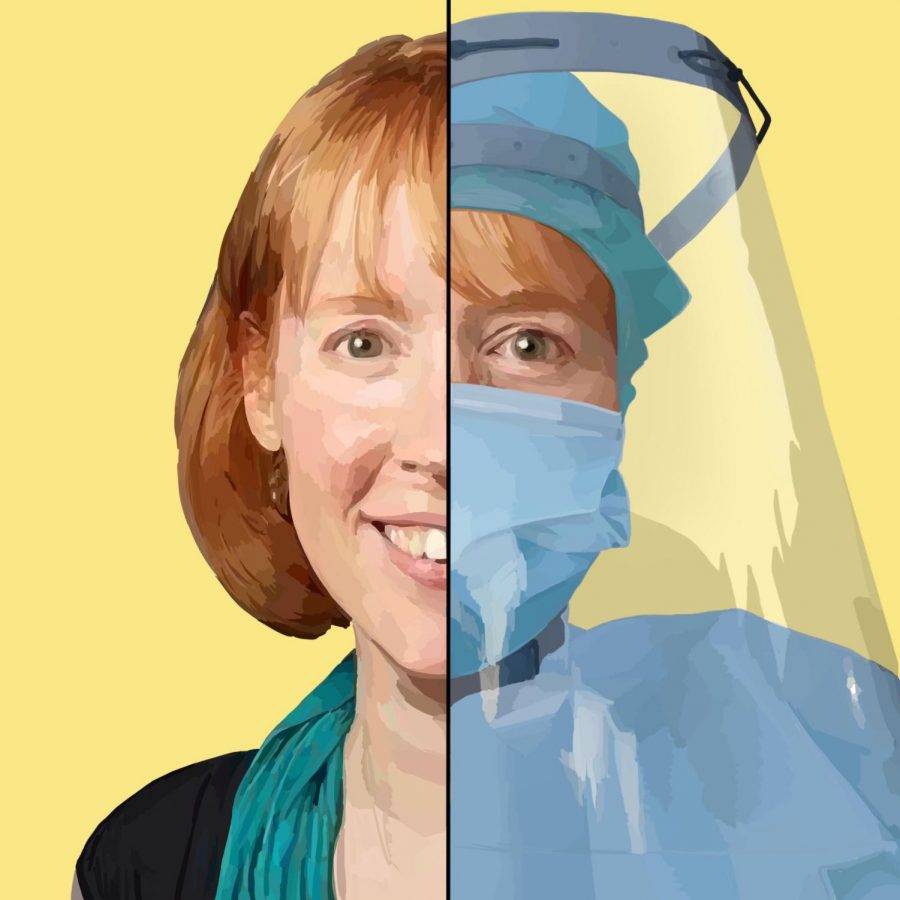 A portrait of Nurse Practitioner Kelly Sanderson. She went to New York City in early May to provide health care for patients in an underfunded hospital. Staff Illustration: Grace Tang.

Behind the Mask is a series exploring the lives of five medical professionals and how their lives have changed because of the coronavirus. This is part four of five, a profile on Kelly Sanderson, a nurse practitioner at Stanford who provided health care to patients in an underfunded New York City hospital for two weeks in early May.

“Doing disaster relief work was something that I had been interested in doing for a while. Strangely, this whole coronavirus scenario made it really easy for me to be able to do it,” Nurse Practitioner Kelly Sanderson said. As a way to save money, Stanford had some workers take their vacation days, and Sanderson scheduled her time off in a two week block from April 27 to May 9 so that she could go to New York City and help coronavirus patients there.

Sanderson volunteered with the International Medical Corps, an organization that provides emergency relief. She said they made every effort to ensure that adequate personal protective equipment (PPE) was provided. She also had experience working with coronavirus patients at Stanford. “I didn’t feel [that my life was in danger]. As long as I had the PPE, I felt like I was going to be okay,” she said.

Sanderson said that she was more nervous about the work setting she could be put in. She had experience being an Emergency Room (ER) nurse, but she hadn’t worked in that environment for a long time.

She ended up in the emergency department of Flushing Hospital Medical Center, an underfunded hospital in Queens. Because it is surrounded by several nursing homes, there was a disproportionate number of older patients who were frail and sick, according to Sanderson. Many had dementia, which is a decline in cognitive skills, and severe, chronic health issues. Sanderson mentioned that there was not a lot of privacy between the 22 beds in the Intensive Care Unit (ICU), which was one big room separated by curtains. Much of the equipment in the ICU was old and needed repair. “They were able to do a lot with what they had, but it wasn’t the shiny, new sort of hospitals that we’re used to in the Bay Area,” she said.

Sanderson said that the initial surge of coronavirus patients had slowed at Flushing when she got there. In fact, she said the pre-coronavirus number of patients in the emergency department could have possibly gone down because many regulars are choosing not to go to the ER.“We’re still seeing a lot of people choosing to stay home [because they] were too scared to come to the hospital [and] didn’t recognize that the symptoms they were having could be life threatening,” she said.

The regular staff members at Flushing were very welcoming to Sanderson but also traumatized by what they had had to face a month prior, when the number of patients was at its highest. Two of the nurses Sanderson met had been there during the busiest month and had dealt with a lack of supplies while caring for a large number of very sick patients. They also had to make the decision of who got certain care when supplies were running low, according to Sanderson. “The stories they told were just horrific. They got put in a position they never imagined they’d be put in,” she said. Many Flushing workers also got sick during that time.

Working at Flushing helped Sanderson realize the stark differences in resources in hospitals. “We’re really fortunate at Stanford to have a lot of supplies. I think [Flushing] just didn’t have the resources to do everything it would have liked to have done in this scenario. That bothered me, and it’ll influence the decisions I make later on in health care,” Sanderson said.