The Coat of Arms • August 21, 2020 • https://menlocoa.org/19088/sports/football-summer-sessions-canceled-in-july-after-players-family-member-tests-positive-for-covid-19/ 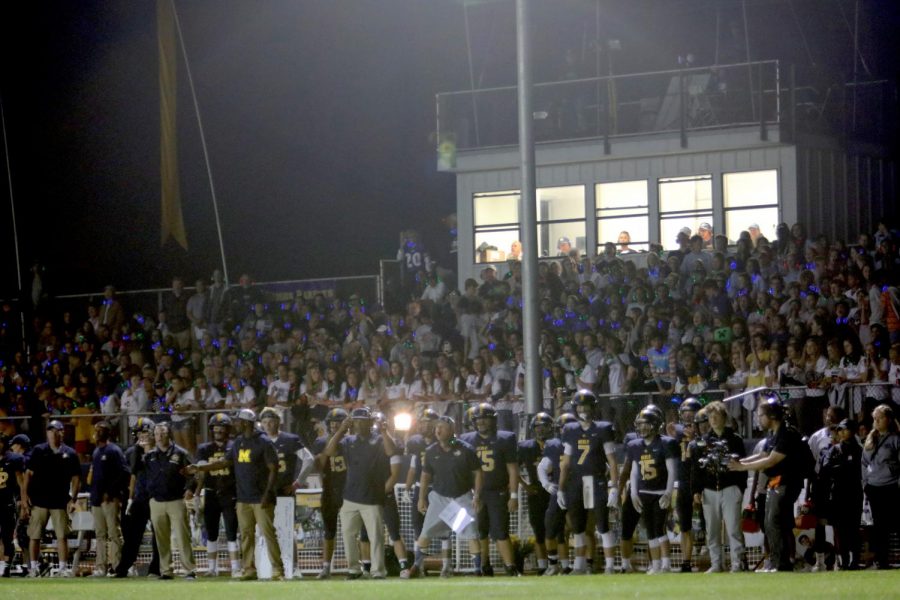 Students, coaches and the rest of the team support Menlo football players during the homecoming game in 2019. As a result of the the coronavirus pandemic, the team is now limited in how they can practice together, and gatherings without social distancing are prohibited. Staff photo: Emily Han.

The Athletics department canceled two football workout sessions scheduled for July 23 and 24 after learning that a family member of one of the players tested positive for COVID-19.

According to Upper School Athletics Director Earl Koberlein, the canceled sessions were the final ones during the football summer program. “Football conditioning workouts had two more days left when it was learned that one of the player’s family members tested positive for [COVID-19],” Koberlein wrote in an email to The Coat of Arms. “Per county guidelines, that individual was not allowed to come to the remaining workouts and out of an abundance of caution we canceled the remaining two workouts.”

The football summer program ran from May to July, according to a schedule included on the Menlo School website.

Athletes learned about the cancellation and the circumstances through an email from their coaches, according to junior Noah Kornfeld. “I think for our safety it was a smart idea to cancel the sessions,” Kornfeld wrote in an email to The Coat of Arms.

According to Football Head Coach Todd Smith, a total of 81 players attended the summer sessions, including athletes from the varsity, junior varsity and freshman teams. There was no shared equipment nor contact during practices, and each athlete stayed six feet away from other players, according to Smith. According to Koberlein, athletes were also divided into stable, unchanging pods of up to 12 people who practiced together.

Every day, coaches logged attendance, and each athlete was subject to a temperature test and a series of COVID-19-related questions, according to Smith. Athletes were required to enter and exit practice areas separately, as well as to wear masks to and from practices, both Smith and sophomore Chris Liao said. Everyone sanitized their hands regularly, and common surfaces were frequently cleaned, according to Smith.

“I thought considering the circumstances, the workouts were handled very well and with the players’ safety always in mind,” Kornfeld said.

Smith believes that holding summer practices benefited the team; he hopes to hold more practices during the fall before the official season starts on Dec. 14, following California Interscholastic Federation guidelines. “I think [the summer program] was very healthy, both mentally and physically, and it really brought our players together,” he said.

“Being out there with our teammates helps us. Even though we can’t do much, it’s better than nothing,” Liao said. “Just getting out on the field is the best we can do now.”

Smith has been working with the Menlo Athletics Department and other coaches to make fall practices possible and safe. “Athletics is very important right now because it is one of those ways where, within working with the frameworks of social distancing, we can get together as close as we can as a community and maintain those bonds,” he said.

“I would love to play football if it is safe,” Kornfeld said. “And I think that is what the coaches [and] administrators plan to do.”

According to a school-wide email from Koberlein and Head of School Than Healy, fall athletics will be able to resume despite the campus closure until November. Coaches will each design a unique program for their particular team.

For fall sessions, the football team will need to make modifications to pre-pandemic practice routines such as using the ball and conducting team huddles, according to Smith.

“I want to get a ball out there and start throwing, but any way we can get out on the field and work out would be good,” Liao said. While Liao would like to start using a football during practices, he believes that preserving the health of team members is far more important.

In making their recent decisions, the Menlo Athletics Department feels it is imperative that coaches and players remain safe, according to Koberlein. “The safety of our student-athletes and coaches [and] staff are of the utmost importance,” he said.

To Smith, adaptability is critical. “County regulations can and have changed, so we have to build the program with flexibility and options for our athletes,” he said.

Neither Koberlein nor Smith could comment on the identity of the individual whose family member tested positive for COVID-19, as well as on most other details of the matter.