The Coat of Arms • September 8, 2020 • https://menlocoa.org/19134/opinions/resuming-in-person-classes-will-be-difficult/

Resuming In-Person Classes Will Be Difficult 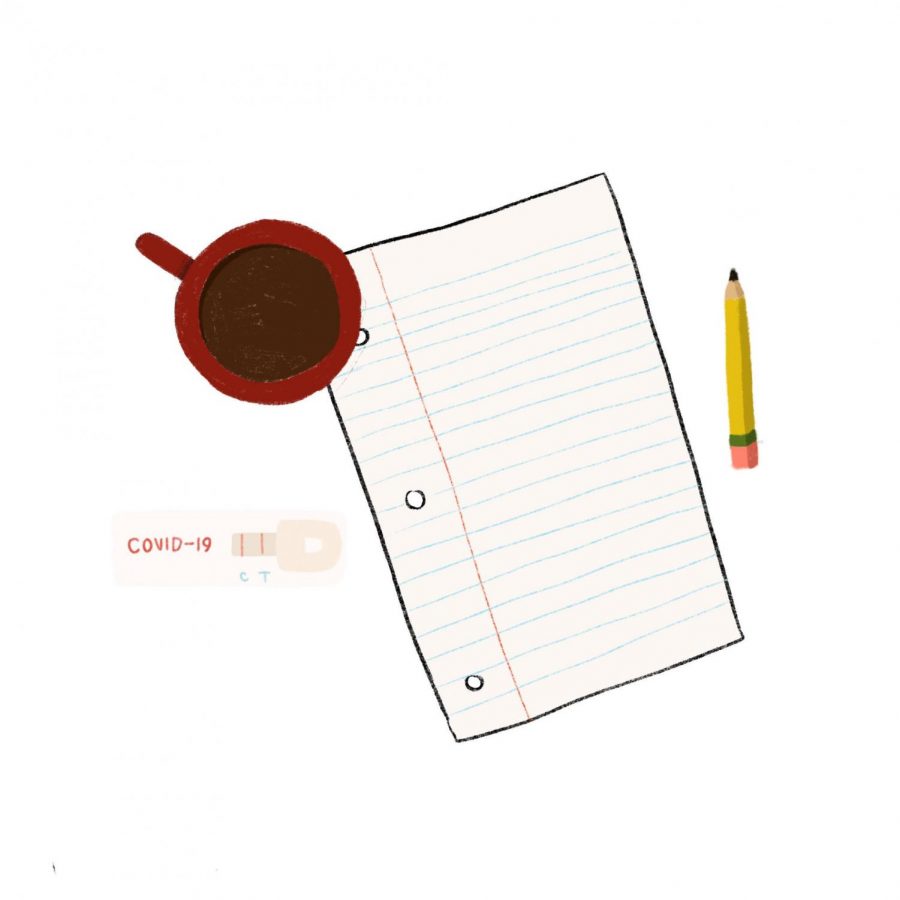 COVID-19 has caused more than 845,000 deaths worldwide, prevented in-person school in many places, cancelled events and caused a lot of suffering around the world. Taking notes on paper has been rendered more challenging by the pandemic; all work and learning now takes place virtually. Staff Illustration: Mallika Tatavarti.

With the COVID-19 pandemic hitting so hard on America, distance learning has become the reality for many students. COVID-19 struck in January 2020, but in March, it began to have a larger effect on the country and the whole world. It still immensely affects our population to this date, with 26.1 million cases confirmed worldwide and 189,000 deaths just in the U.S.

Schools in different states and counties have varied views on the proper way to resume school, whether that be on Zoom, in-person or some type of hybrid schedule. California is one of the states that has been particularly cautious amid this pandemic, resulting in schools being completely online. Governor Gavin Newson has implemented some strategies and precautions in California. Due to the state’s spike in cases earlier this year, there are many more restrictions in California than most states.

Menlo has made the right choice to conduct classes entirely online up until Nov. 1, for now. With no vaccine and COVID-19 rates remaining high in California, it would be too unsafe to have students on campus, even with a hybrid model. After someone tests positive, there is a manhunt to track the people that person has been in contact with. Contact tracking has been vital in some areas for people to limit the time on how they got infected. In addition, each person who tests positive must self quarantine for 14 days. There are simply too many variables to run an in-person school smoothly for a long duration of time.

“[The factors involved in resuming school include] whether we are allowed to by the State of California; if the testing turnaround time has gotten short enough to allow us a chance to do some kind of testing and tracing program; and whether the infection rates in our area, specifically San Mateo and Santa Clara counties, have dropped to safe[er] levels,” Head of School Than Healy said in an email to The Coat of Arms.

In addition, Healy spoke upon the return of school. “I won’t speculate at this time since there are too many variables that are out of our control,” he said. He also believes that many aspects need to go in the right direction for Menlo to have even a slight chance of reopening. At this rate, it’s unlikely that on-campus classes will occur during the 2020 school year. I agree with Healy because it’s not just a couple of factors that need to go right; several things need to go just as planned — with no mistakes — for Menlo to have a chance at resuming normal classes.

However, one thing that could change when we return to campus is a vaccine. The time frame for the COVID-19 vaccine is not confirmed.

Our president thinks that there will be a vaccine good to go by the end of 2020, while others such as Dr. Anthony Fauci and medical experts believe that it could be well into 2021 before there is a vaccine.

Around the country, colleges and universities have tried to resume on-campus learning, but these attempts have been largely unsuccessful. For example, Georgia allowed schools to reopen on campus, instructing students not to have parties and large gatherings. But the exact opposite happened, and it didn’t go as Georgia was expecting, as there was a spike in cases there.

Ultimately, it is better to play safe than sorry. The schools that went ahead and allowed students on campus simply made it harder for them to hold safe in-person classes down the road. I believe that Menlo should wait until it is abundantly safe before resuming classes on campus.