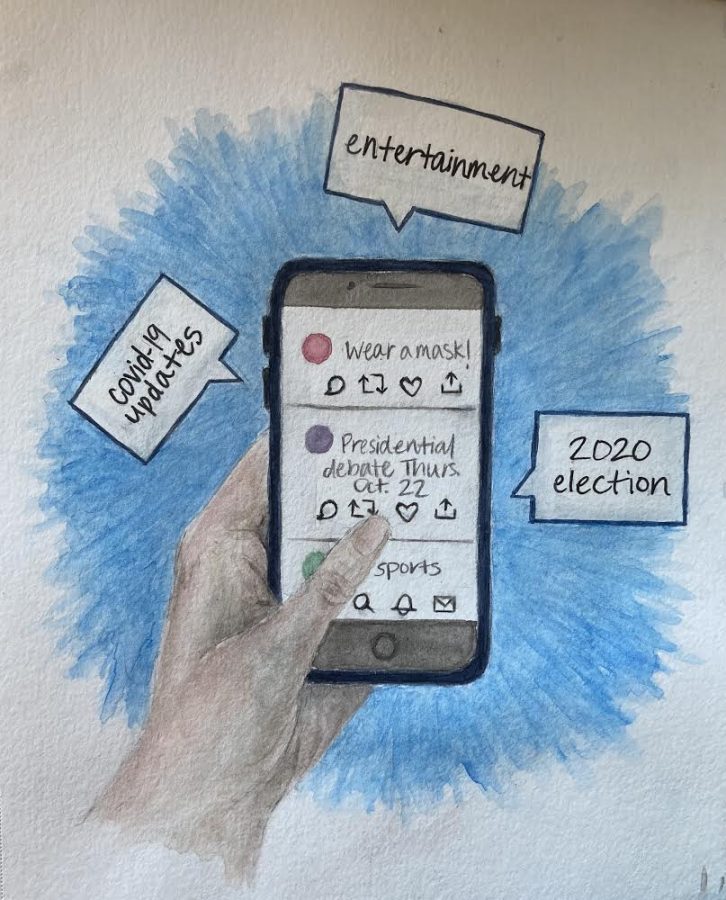 Twitter can provide you with any type of news you are looking for, whether that be politics, sports or entertainment. Staff illustration: Michele Hratko.

Being a professional NBA reporter is pretty cool, but when you tweet the news of President Trump contracting COVID-19 five seconds later than he does, that’s pretty fascinating too. Twitter can be a powerful place for people to announce and spread vital information.

At 26, NBA reporter Shams Charania has released several pieces of breaking news concerning topics such as free agents, schedules and times for playoffs and trades. However, the biggest piece of news that he has released was a tweet announcing that Trump had tested positive for COVID-19. Charania started his career as an unpopular writer for an NBA blog and became a well-known reporter on Twitter; in this way, he shows that Twitter can give someone a lot of power by allowing them to quickly convey important news.

On Twitter, one can become educated in a vast number of topics while obtaining accurate information.

With over 846,000 followers on Twitter, Charania makes the majority of his presence there. By having such a large number of followers, Charania is able to get recognition for breaking news. In general, Twitter is meant for breaking news to be shared by allowing specialists to tweet to inform their followers.

Based on conversations I’ve had with friends and peers, it appears that around 75% of them actually use Twitter to read about breaking news. Most, however, also get their updates and notifications from other people, the Apple news app or major media outlets like CNN or Fox News. CNN has a place on their site that is solely about “CNN’s Reliable Sources.”

At times, it is hard to see if a certain tweet on Twitter is reliable or not. CNN has recently published an article about whether or not Twitter is the right place for journalists. If you want to find out about news as soon as possible, however, Twitter is the right app for you. “Twitter facilitates real-time propagation of information to a large group of users. This makes it an ideal environment for the dissemination of breaking-news directly from the news source and/or geographical location of events,” researchers from Wellesley College wrote in a paper titled “Information Credibility on Twitter.”

Twitter also informs users of everything they need, where users can search anything they want, and information will be provided for them. For example, if you are curious about updates on a certain baseball team, it would be on Twitter. However, if you are wondering about the latest news on the presidential election front, you can also look that up, and lots of information will pop up. On Twitter, there is breaking news appearing all across the app — whether in sports or something totally different. If you are wondering about news, NFL, MLB or other types of breaking events or news, Twitter has you covered.

With its ability to break news quickly and to cover a variety of news topics, it is a must-use app.