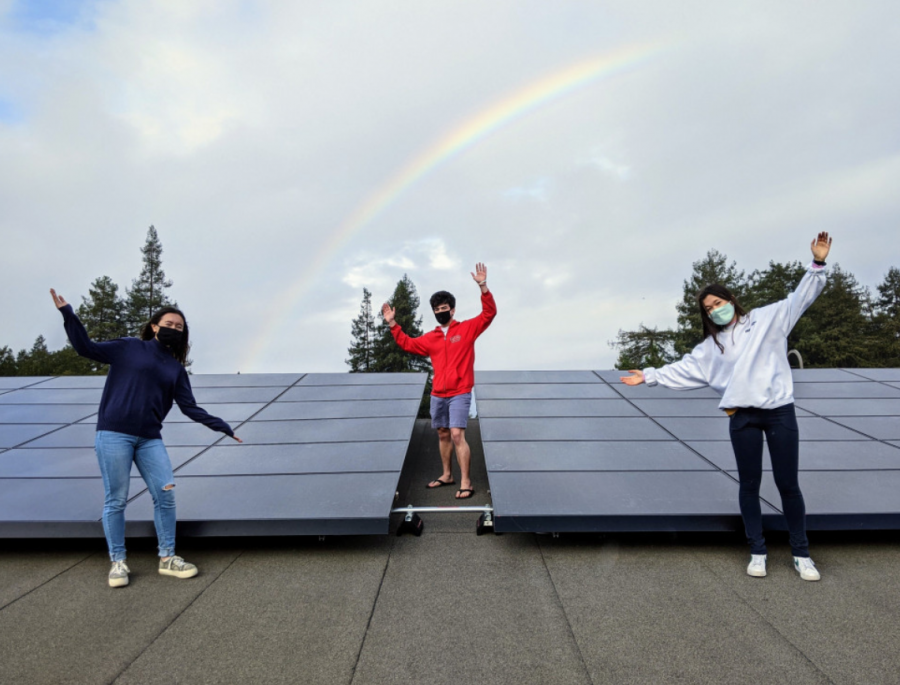 Tesla Energy recently installed solar panels on the roofs of the Creative Arts and Design Center (CADC), the Spieker Center for the Performing Arts (SCPA) and the Athletic Center. This project expands Menlo’s solar energy capacity by 315% and will offset roughly 75% to 80% of the energy for those three buildings, according to senior Alix Borton. The installation was also free of charge, saving Menlo approximately $400,000 in addition to $96,000 annually on energy bills, according to Borton.

“At the point we are at with climate change, we are starting to feel the urgency that many places have been feeling for a long time. With that urgency, the school becomes responsible to lead by example,” Environmental Science teacher and Director of Sustainability Chrissy Orangio said. “Moving toward solar energy is the next step for creating a sustainable future at this school.”

Orangio feels that this installation was an opportunity for Menlo to reduce its climate footprint in the coming years. “Reducing our carbon footprint is really important. The more buildings on solar and not natural gas-burning fossil fuels, the more we are doing our part to slow climate change,” Orangio said.

Senior Alix Borton, who leads Menlo’s Climate Coalition, agreed that there were no downsides to the installation of these Tesla solar panels. “The Climate Coalition’s goal was to lower Menlo’s energy output,” Borton said. “With Menlo’s accommodations when it comes to student initiative, this change allowed us to begin lowering carbon emissions and accomplishing our goal of becoming more solar panel orientated.” This installation was better for the school and the environment, according to Borton.

One member of the energy branch of the Climate Coalition, senior Gabby Kogler, contributed to initiating the installation of these panels. “We realized that the CADC does not have solar panels, but it was designed to have them,” Kogler said. “So we made it our goal to get solar panels on it.”

Borton and Kogler worked together with the help of Menlo staff members and other Climate Coalition members to determine which provider could be used, what the potential cost would be and calculated energy outputs. “This installation came together thanks to Director of Operations and Construction Loren Arms’ efforts and Tesla Energy’s ability to install these for free,” Borton said. Final inspections occurred throughout the week of Nov. 16, and Menlo was able to begin using the new solar panels just before Thanksgiving break began on Nov. 21.

Orangio highlighted Menlo’s two-part plan for the future: conducting an audit to get a foundation on the school’s current energy use and continuing to educate the school community about sustainability and climate change. “Before setting concrete goals, we need to know where we are at. I am going to look at energy consumption and energy use on campus,” Orangio said. “This audit will give us important data about energy on campus so we know where [we] go from there.”

Orangio emphasized the importance of knowing Menlo’s sustainability status so that the school can begin implementing changes and working toward finding solutions to solve energy waste and energy consumption. “The installation of these solar panels is also a really good opportunity to open up the conservation about energy and wasting energy with students. The panels are a great example of a solution,” Orangio shared.

There are many ways students can make changes in their lives, such as remembering to turn off the lights when they leave a room or unplugging devices that are fully charged. “I think people sometimes are not careful and do not understand that leaving a fully charged computer on the charger overnight is wast[ing] energy,” Orangio said.

“It is clear […] to me that Menlo is constantly making an effort to become a more sustainable campus. They have done a lot, but there is still a lot more to do. I think the biggest step we can take right now is the educational piece with students; it will be fundamental moving forward,” Orangio said.