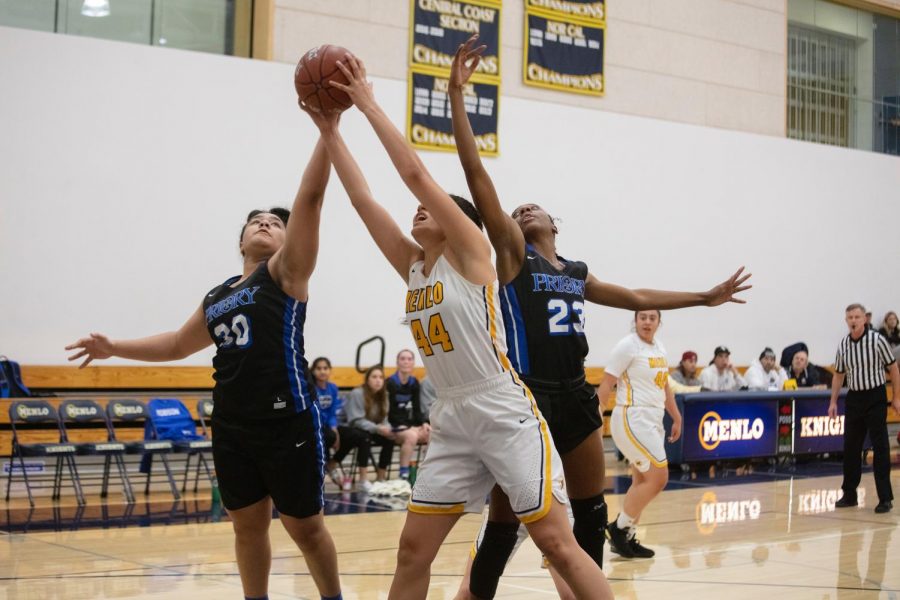 The Menlo girls basketball team competes in early 2020. As a result of a recent lawsuit by high school students in San Diego, California is reopening many indoor high school sports. Photo courtesy of Doug Peck.

Note: This page will continue to be updated with details as this story develops.

A legal settlement against the State of California will lift remaining restrictions on high school sports such as basketball, volleyball and wrestling. Student-athletes in a majority of California’s 58 counties, including San Mateo County, will be allowed to play indoor sports while their county’s case rate stays below 14 per 100,000 people. Local counties and schools have the final say in overturning this decision.

The lawsuit was filed last month by high school football players from San Diego County. They argued they were receiving unequal treatment from the state while both professional and collegiate basketball teams were allowed to compete under certain COVID-19 protocols.

The high school students’ attorney, Stephen C. Grebing, stated in the Mercury News that masks will be required for all coaches, staff and players on the bench, but are not necessary for athletes while playing. Grebing added that up to four spectators per player will likely be permitted, but the details are still being finalized.

The California Department of Health (CDPH) has not published official guidelines yet but is expected to do so on March 4 or March 5, according to Upper School Athletics Director Earl Koberlein.

“Volleyball [already began] practicing indoors earlier this week based off of CDPH guidelines for gyms and fitness centers allowing 10% capacity while in the red tier,” Koberlein said in an email to The Coat of Arms. “Menlo is excited to have student-athletes playing again and want to make sure it is done safely. We know how important participating in sports is for our youth and will do what we need to do to make it happen.”