Menlo to Bring 100% of Students on Campus After Spring Break 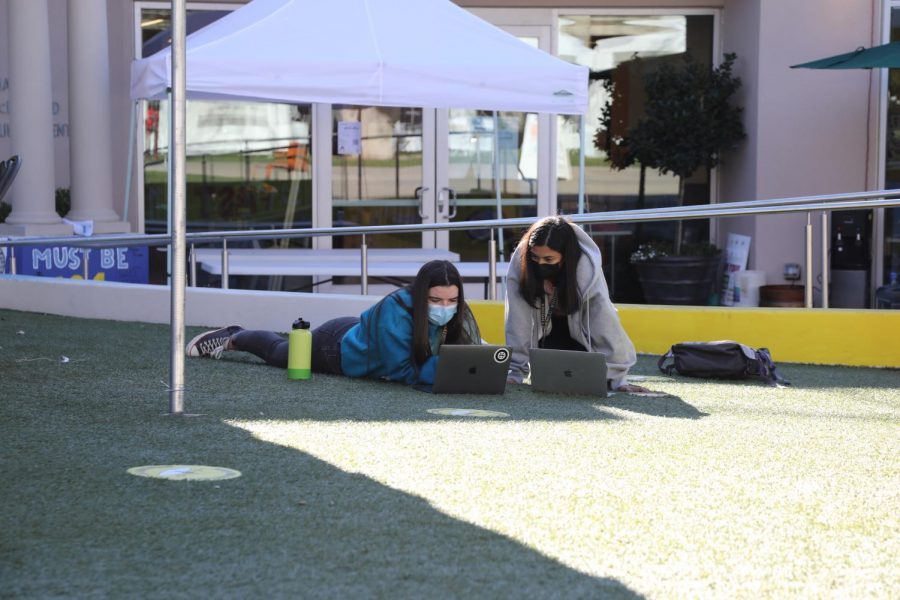 Seniors Tessa Grosso and Stella El-Fishawy, both in the Gold hybrid group, study on the quad together. When all students return to campus April 19, only seniors will be allowed to study on the quad during free periods, as many areas of the quad will be used as classroom space. Juniors, sophomores and freshmen are assigned other areas on campus for free periods. Photo courtesy of Lucas Vogel.

Menlo intends to bring 100% of students back to campus each day starting Monday, April 19. According to an email from Head of School Than Healy, there will be a seven-day quarantine and distance learning period directly following spring break, as opposed to the 14-day distance learning periods implemented after previous breaks this school year. “Some of [the reasoning for the change] is the CDC and the county shifting its guidelines, and some of it is the fact that we have more people vaccinated on campus,” Healy said. He also noted that the reason that a quarantine period is still in place is because most students don’t have access to a COVID-19 vaccine, and the school anticipates that many families will travel over the break.

During that period, all students who plan to return to campus must be tested twice locally for COVID-19. According to Health Services Coordinator Joan Barada, Menlo will continue to test students biweekly for COVID-19 after the quarantine period. “Once we go 100%, our medical advisory board has requested that we test twice weekly,” Barada said. “They are always worried about increased transmission […] [they] felt more confident with our wish to have everyone back on at once […] if we were testing more frequently.” Barada added that the tests conducted during the quarantine period are designed to capture any positive results that were obtained over the break. According to a video message from Upper School Director John Schafer, an email will be sent in the coming days with more information about the testing protocol.

Healy and Barada explained that although the CDC has officially changed the distancing recommendation for desks in schools from six feet to three feet, Menlo will continue to keep a six-foot distance between desks. “Our Medical Advisory Board is not supportive of moving to three feet, even if the county approves it,” Healy said. However, the school may reevaluate its plans after two weeks with 100% of students on campus, and if “county guidelines change and the Medical Advisory Board is in a slightly different place,” the school may reduce classroom distancing guidelines to three feet.

In his video message, Schafer said that most Menlo classrooms can fit 12 students under the current county distancing guidelines. Some science and art classrooms can fit more. If classes have more than 12 students, some students will have to sit outside on the quad during class. “The quad will be set up as an auxiliary learning space,” Schafer said. “We will have desks and chairs out there and it will be a quiet space.” Starting April 19, freshmen, sophomores, and juniors with a free period will not be allowed to be on the quad during it. Freshmen will be in the library and sophomores and juniors will be in The Commons and Spieker Center patio area. Seniors will be allowed to remain on the senior quad for their free periods.

Another aspect of the day that will be altered with everyone on campus is lunch. According to Schafer, lunch is the “main area of vulnerability on the health front” because students are not wearing masks when eating. “We’re going to spread you out more,” Schafer said. Seniors will continue to eat on the senior quad and will overflow to the junior quad. Juniors will be moved to the Whitaker lab area of the quad, which is normally the freshman and sophomore quad. Sophomores will eat in The Commons and Spieker Center patio area, while freshmen will eat on the loop.

According to Barada, there has so far been no detected COVID-19 transmission on Menlo’ campus, and Healy added that there have been zero positive COVID-19 tests in four of the last five weeks, and that the Menlo positivity rate has been “well under 1% since testing began.” “Even though we’ve had high community percentages [of positive COVID-19 tests], even while we’ve had students on campus, we have basically had a very safe environment on our campus,” Barada said. Barada clarified that even if the rates of positive tests in the community increased, Menlo would not necessarily return to distance or hybrid learning. Instead, the transmission rates on campus are a more important factor. “If we were seeing transmission on campus, [returning to distance or hybrid learning] would definitely be an option,” Barada said.

Additionally, the Upper School Student Council has been consulted by the administration in decision making processes regarding the complete return to campus. “One of the things we’ve noticed is that lunch is really long and that tutorials may not be so needed […] so we gave them our opinions, and I think they’re thinking about cutting time for that,” Student Body President Lindsey Canessa said. Overall, Canessa described that she feels that the students that she represents are typically in favor of returning to campus 100% of the time, and it has been something students have been “literally begging the administration for.”