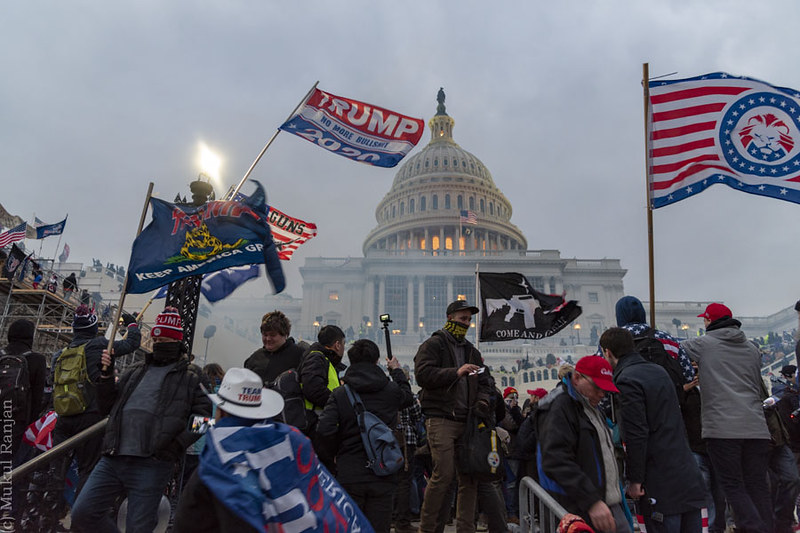 The Capitol mob displays how law enforcement uses excessive force against African Americans in comparison to white Americans, even when peacefully protesting or being unarmed. Creative Commons photo courtesy of Blink O’Fanaye on mississippifreepress.org

One year ago, George Floyd was murdered by former police officer Derek Chauvin — a consequence of police brutality. In light of this event, it is critical to unpack how the Capitol insurrection reflects our society’s ever-persisting racism.

A mob of Donald Trump supporters raided the U.S. Capitol, resulting in the deaths of five people on Wednesday, Jan. 6, 2021. This event put democracy in danger while simultaneously giving the world insight into American law enforcement and our racially unjust society.

The events that occurred in the U.S. Capitol can be attributed to both former President Trump’s false claims of election fraud and the Capitol law enforcement’s failure to anticipate and efficiently react to the mob. Those who raided the U.S. Capitol were Americans from a number of extremist groups. They entered the Capitol waving Confederate flags high in the air and carrying guns without fear of consequences from law enforcement — an unstated privilege they have as white Americans. Because of this privilege, many of the men and women who took part in these acts were able to leave the Capitol without family members facing grief.

But what if the mob consisted of African Americans? Would the outcome be the same?

According to the Philadelphia Inquirer, not only would law enforcement have acted with more urgency, but also the outcome of this event would have been very different. “The vast majority of the rioters were white, angry Trump supporters. Some were bold enough to climb the steps of the Capitol toting Confederate flags and weapons. They broke windows. They put their feet on people’s desks. They fought with police,” according to the Philadelphia Inquirer. “All the while, their white privilege protected them. Had they been Black, blood would have flowed down those white steps. They would have been shot with rubber bullets before they even made it inside one of the nation’s most important buildings. African Americans would have been rounded up and taken away by the busloads, the way they were last summer during Black Lives Matter protests.”

In our country, African Americans consistently have to forgive, forget or move on from the unfortunate events that occur in their communities. African Americans do not have the privilege to actively react to events (such as through protests or demonstrations that, when videos displaying police brutality from law enforcement already prove the tragic consequences when African Americans do — even with the peaceful Black Lives Matter protests of 2020.

Moreover, law enforcement in America treats African Americans with more suspicion than their white counterparts, viewing the color of their skin as a predetermined factor in the judgment of their character. This prejudice is revealed by NYU professor Ravi Shroff , as his research indicates that Black people are pulled over at higher rates than White Americans: “A new study, undertaken by Ravi Shroff, an assistant professor holding joint appointments at NYU Steinhardt and NYU CUSP, and his colleagues at the Stanford Opening Policy Project, found that in a dataset of nearly 100 million traffic stops across the United States, black drivers were about 20% more likely to be stopped than white drivers relative to their share of the residential population. The study also found that once stopped, black drivers were searched about 1.5 to 2 times as often as white drivers, while they were less likely to be carrying drugs, guns, or other illegal contraband compared to their white peers” Ravi Shroff said.

Moreover, according to history teacher Katina Ballantyne, the difference between law enforcement’s reaction to white and Black Americans is exemplified through their actions in the BLM protests and capitol riots. “I also think that police used a lot of force against protestors [at the BLM protests]. I have a friend who’s a teacher in Austin, and she broke her ankle because a police officer fired a beanbag gun at her foot, and up to this point, her foot is still fractured from it (from around January), […] and I don’t think that would have been fired into the crowd at the Capitol” Ballantyne said.