The Coat of Arms • September 29, 2021 • https://menlocoa.org/20833/news/quad-fight-about-senior-territory-highlights-problems/ 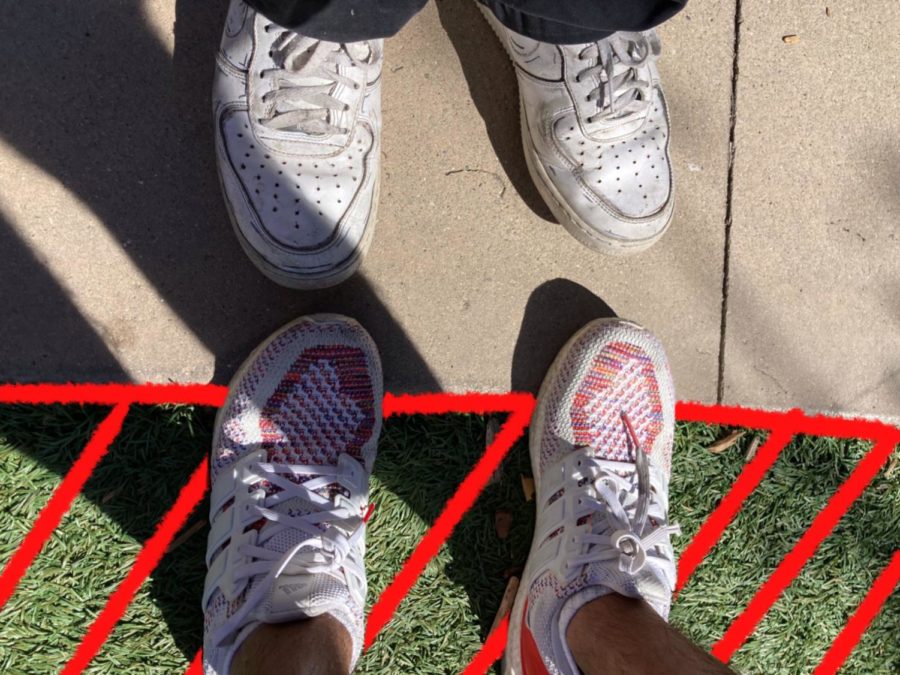 A physical altercation involving a junior boy and a senior boy on the edge of the senior quad broke out during lunch on Tues., Sept. 21. Neither boy was seriously injured, and after punches were thrown for a few seconds, Head of School Than Healy rushed over and broke up the fight.

Upper School Assistant Director Maren Jinnett wrote in an email sent to students that both boys went before the Discipline Committee and have received a one week suspension from on-campus learning and activities. The email also mentioned that the two students will go through a “restorative process that addresses the harm they caused each other and the school as a whole.” They will have to report this altercation to colleges.

A number of rumors have been circulating around the fact that the junior boy was wearing a large Mexican flag around his shoulders when the fight happened. Upper School Director John Schafer, who talked to both boys, asked them what the nature of the conflict was. “I asked them, ‘Was the confrontation about the flag?’ and both boys said to me, ‘No, it was not. It was about the quad,’” he said. “I said to the faculty last Wednesday that this was not and it was a race issue in that the cause of the conflict was not race or ethnicity; however, many students made the assumption that the flag was the point of conflict. Some people worried that the flag had been denigrated and were quite upset.”

Sophomore Andre Gonzalez Lombera, a friend of the junior boy, recorded a video of the fight that was shared around by many students. “I sent the video to a couple of my friends. I don’t know how it spread that fast. I didn’t intend for it to go to the whole school,” he said.

The Coat of Arms requested interviews with both boys involved but neither responded. However, Schafer confirmed that they both said the reason for fighting was the senior quad.

Traditionally, seniors are the only class allowed on the part of the quad by the Student Center, and that area is known as “the senior quad.” Recent points of tension with how seniors have been telling other students to stay off that area have led Schafer and other school leaders to think about the future of this tradition. “We’re going to let the dust settle a little bit. Then, at some point fairly soon, we need to have a conversation about the sense of policing around the quad and how to make that consistent with the school’s larger values,” he said. “If we have a fight [about] whether or not someone’s toes were on a little piece of turf, then we have a problem.”

Schafer said he cannot recall a fight like this happening throughout his 22 years at Menlo. “We need to talk about how to allow the seniors to have some sort of sense of specialness, but without any kind of toxicity or violence because that’s unacceptable,” he said.

Jinnett called the Discipline Committee together to discuss the lunchtime altercation to advise on disciplinary action. She chairs the Discipline Committee, which is composed of a “thoughtful and diverse group of students and faculty,” according to a letter sent out to the whole Menlo community about disciplinary procedures by Schafer. Jinnett tries to get a large range of perspectives within the committee. “I genuinely think we’ll come to better decisions if we disagree and have to work through that disagreement,” she said.

Though Jinnett emphasizes the importance of her collaboration with the disciplinary committee, they are used primarily as an advisory board; she and Schafer make the final decision, with review as needed by Healy. According to Healy, he asks about the process and hears the decision. He has the right to amend, overturn or uphold the decisions. In this case, he upheld it. “I think it’s the right process for this school,” he said.

Jinnett told The Coat of Arms she’s curious about how the community reacts to incidents on campus and is heartened by the way the community is reflecting on the confrontation. “I am always concerned when student disagreements escalate, but I also try to keep those moments in context, both for the students and the school as a whole. The conversations that surround an event are just as important if not more so than the moment itself, and we all have a responsibility in that dialogue,” she said.

An unusual part of this suspension is that both boys have joined the Remote Learning List during their suspension. Jinnett reflected on sharing information with the Menlo community. “I try to balance transparency with student privacy when sharing discipline decisions,” she said.

Abby Becker contributed to this story