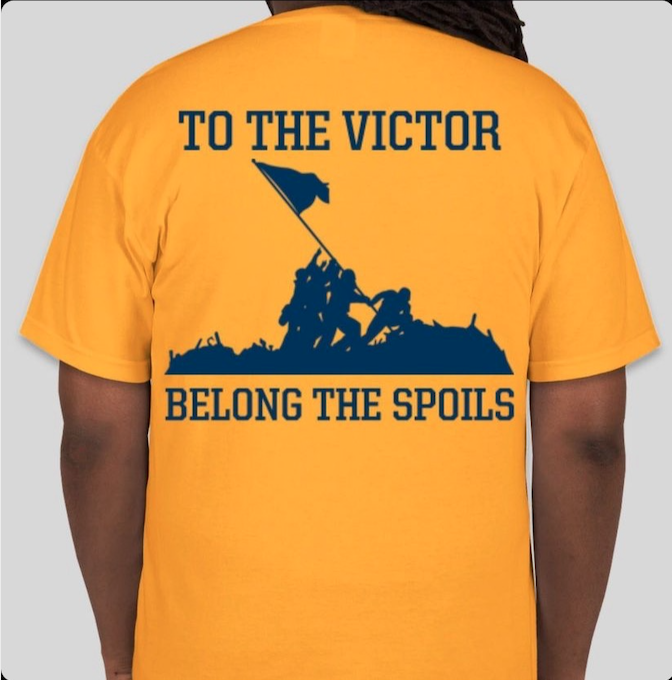 A T-shirt design by senior Logan Deeter for the Sea of Gold caused controversy within the Menlo community. Photo courtesy of Carolina Espinosa.

On Tuesday, September 28, the Sea of Gold, Menlo’s student-run athletics spirit organization, published an Instagram poll for students to vote on T-shirt designs. The design, which drew 55% of the over 350 votes cast, included an image depicting American soldiers raising the American flag on the south pacific island of Iwo Jima, a Japanese territory, during World War II. The image raised complaints from several members of Menlo’s community.

For several years, the Sea of Gold has held a T-shirt design contest open to all students. The design is meant to promote Menlo pride and athletics spirit. This year, the Sea of Gold captains, who are all senior students, chose two submissions to publish in their poll, one of which was designed by senior Logan Deeter and featured the controversial image. “The captains decided on the two designs that we liked to be voted for on Instagram and Logan’s got the most votes, so it became the design we chose,” Sea of Gold captain Carolina Espinosa said.

Deeter’s design featured the phrase “to the victor belong the spoils” in a navy text over a gold background. The text framed the image of American soldiers on Iwo Jima, commonly known as “Raising the Flag on Iwo Jima.”

However, the image shows American soldiers conquering Japanese territory during a traumatic and bleak period of history, especially for Japanese citizens and Japanese-Americans. Many people felt that comparing the gravity of war with a high school football game was insensitive. “There were some issues about that image being used,” Dean of Student Programs Eve Kulbeida said. “Some wondered how our Japanese students might feel wearing a shirt with this imagery, and also the idea of comparing war to sport [caused concern].”

Consequently, several members of Menlo’s community felt uncomfortable enough to vocalize their concerns. “It was initially brought up to me by faculty member Marc Allard, but after that, a lot of people of all different cultural backgrounds said to me that they would like to see a change in image,” Kulbeida said.

A Pulitzer Prize-winning photograph taken by photographer Joe Rosenthal on Feb. 23, 1945, “Raising the Flag on Iwo Jima” shows six U.S. Marines raising the flag on Mount Suribachi after its capture during the Battle of Iwo Jima. The image is now one of the most recognizable photographs of American soldiers during World War II and has been reproduced and circulated many times. It was turned into a statue for the Marine Corps War Memorial of 1945, was published on postage stamps and has been referenced several times in popular culture.

Deeter had felt that the picture’s values aligned with the Sea of Gold’s. “It’s a picture of an iconic event in American history that symbolizes a lot of pride for the country, so I thought it was good because it would show Menlo’s school spirit,” Deeter said.

However, he had not intended, nor expected his design to be controversial. “When [my design] won I thought nothing of it, I was just honored. It wasn’t till the morning after that I got notified that it had to be changed, and I sort of was taken aback, to be honest.”

The Sea of Gold was initially hesitant to replace the original image, so the issue was addressed at a Student Council meeting on Sept. 29. “The Sea of Gold had come up to me asking if they could have a space to talk at Student Council, so I invited them to a meeting. All of the [Sea of Gold] leaders plus 10-15 seniors came,” Student Body President Sammie Dostart-Meers said.

According to both Dostart-Meers and Espinosa, the additional seniors had come to support Deeter and his design. However, initial discussions proved to be unproductive. “[Student council] is very senior-heavy right now, so I think that combined with having extra Sea of Gold supporters there made it confrontational, like an us-versus-them situation,” Dostart-Meers said. A second meeting was then held with fewer people. “I felt an off-to-the-side meeting with a smaller group might feel more productive,” Kulbeida said.

According to Dostart-Meers, a smaller meeting then occurred, attended by Student Council Treasurer Saaz Ahuja, Sea of Gold Captains Tyler Flynn and Mick Tamas, Deeter, and Kulbieda.  “I think that’s where more productive discussions occurred, and we discussed how this could have been done in a better way that might not offend people,” Dostart-Meers said.

Ultimately, a decision was made to replace “Raising the Flag on Iwo Jima” with a different image. The phrase “to the victor belong the spoils” remained.

Deeter does not completely agree that the image should have been changed because he didn’t intend to offend anyone by trivializing war. “I was sort of frustrated that people were taking [the image] that way, but I realize that intentions can be misinterpreted and that not everybody sees things in the same way that I do,” Deeter said.

Espinosa didn’t understand why the image wasn’t allowed when it is so prevalent in historical records. “The main issue I had was that a lot of people were against the image, but that picture is everywhere in our history, museums and textbooks,” Espinosa said. However, Espinosa also understands how the image may be misinterpreted if displayed on a school T-shirt.

While the Sea of Gold pushed to include the image, they also acknowledge the benefits of compromise. “[The image] has the potential to hurt people a lot, so I think getting rid of it but keeping the quote is a good compromise that keeps the original idea,” Espinosa said.

According to Espinosa, the Sea of Gold is currently in the process of redesigning the T-shirt to include an image of a sword instead.