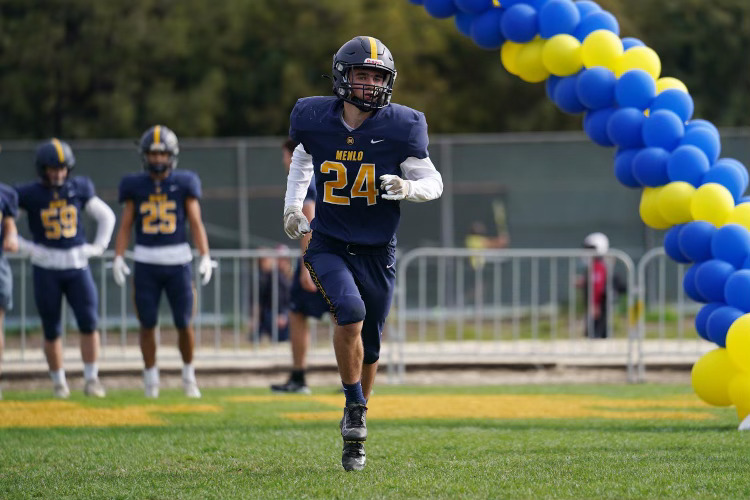 According to Smith, Yagen is a natural fit on the team because of his work ethic. “He embraced everything right away. It was new to him, and he dove in head-first,” Smith said. “He didn't question anything. I think he realized he didn't have time to. He just had to trust. The first thing we talk about in the program is respect, and that’s how you earn respect.” Photos courtesy of Andrew Yagen.

“I can barely imagine having not played football. I’m such a different person because of it. […] It was one of the best decisions I’ve made in high school,” senior Andrew Yagen said.

Yagen does not fit the stereotype of a varsity football player. His six-foot physical stature is not over-imposing, he does not flaunt his athletic abilities and he doesn’t boast about his workout regimen.

“I really enjoy spending time with the football team. I love the sport just as much as everyone else. But I wouldn’t say I’m like the core persona of a football player,” Yagen said. “I would probably associate myself more with some of the more nerdy kids I hang out with.”

He is not the star player; he usually enters the game as a wide receiver towards the fourth quarter when the Menlo Knights are maintaining a comfortable lead, although he plays an important role as a starter on kickoffs and punt returns. Perhaps more than any other factor, Yagen breaks from the archetype in one major way: his senior season is the first time he has ever played tackle football.

Yagen’s mentality towards football and life, in general, makes him an unassumingly great fit in the Menlo varsity football program.

To Play or Not to Play

Growing up, Yagen played basketball and ran cross country. Football was never really on his radar. His family knew as much about football as the average American would, but the sport was never celebrated in his household. “I played flag football once in 7th grade, but I wasn’t really into it. I watched the Super Bowl game sometimes, but that was about it.”

Yagen began playing lacrosse in high school and met many of his future football teammates in the Menlo lacrosse program. The relationships from the lacrosse team made the idea of playing football more digestible. “I probably wouldn’t have played football if I hadn’t met so many of the guys on the lacrosse team. That was a big stepping stone that made it ok to start [football] senior year.”

Football is a unique game of discipline, according to varsity head coach Todd Smith. “It’s a really demanding game. Everyone has their own individual job every single play, and that job changes on a number of different calls,” Smith said.

Knowing that football is one of the most physically, mentally and time-intensive varsity sports at Menlo, few students join the team without playing JV first. Additionally, joining a team with all but one of his fellow seniors having played for three years and entering their fourth should have seemed daunting. Yagen, however, didn’t see that as an obstacle. “I had kind of considered playing my sophomore year, and every year after I had considered it more and more. I really didn’t want to leave high school with the regret of not playing,” Yagen said. His parents were supportive of the decision.

Smith recalls the first time he met Yagen. “He was bright eyed and inquisitive and he was nervous. And I said to him ‘you’re making a great decision.’ One of the unique things about Menlo is it’s a small community no matter if you’ve been playing or not. I’ve never been around a school or a community that accepts each other more than we do here at Menlo so that just bled onto the football field.”

When it came to the rationale behind his decision, Yagen cited multiple reasons, one of them being his experience playing lacrosse. “I really liked the contact of lacrosse. I mean I’m not necessarily a huge kid, but I enjoyed that about the sport, which I didn’t get playing basketball or especially cross country.”

Yagen believed playing football would also prepare him better for his future career. “I plan to join the military, and it actually has a surprising amount of similarities [to football]: the aggression and the way that they coach you to have good character. The coaches told us that they care more about developing our character than winning, so in that sense, [football] connects to that goal I have.”

The idea to first join the military popped in Yagen’s head about a decade ago, but he began seriously considering the idea at the beginning of quarantine. “That might be a coincidence because I had more time to spend online and listening to other perspectives, but I came to the realization that that was something I really want to do.”

To Yagen, working towards something larger than himself is incredibly important. “The way I view self sacrifice is the more you’re giving for something greater than yourself, the better you feel. The more fulfilling it feels. The army is kind of the pinnacle of that. You’re potentially putting your life on the line, doing hard infantry tasks. You’re going to war, and I see that as like the most fulfilling thing you can do in life,” Yagen said.

That same idea of self sacrifice is what draws Yagen to football. To a lesser extent, he feels like playing football provides that same aspect of self discipline and comradery. “You’re working for something greater than yourself. You’re trying to win for your school. I know that’s true of all team sports, but football has that special appeal where everyone goes to watch the big games. That is what really makes [football] so great.”

While the time commitment and physical commitment to football is intense for varsity players, Yagen wasn’t deterred. In fact, those aspects are exactly what appealed to him for his future in the military. “It takes a lot of time out of your schedule, and that’s probably the hardest part about it. Obviously the practices are hard themselves, but that’s really what I was looking for. And so when we are going through all our summer practice and everything in our fall camp, I loved it.”

“24 just sounded cool,” Yagen said. He began practicing with the team in July after the team’s initial meetings in June. He plays wide receiver, safety and on special teams. “He certainly can run well. He’s been able to catch the ball well for us, and he does a great job of blocking in space,” Smith said.

Yagen may not be the star player, but he has found an important spot on the team. “I didn’t feel really excluded at any period of time by the team as a whole, and I really enjoyed that. My coach made it clear to me that even though I had never played before I would still be providing some benefit to the team, like relieving some of the starters. I found my role on the team, and I love the team chemistry.”

According to Smith, Yagen is a natural fit on the team because of his work ethic. “He embraced everything right away. It was new to him, and he dove in head-first,” Smith said. “He didn’t question anything. I think he realized he didn’t have time to. He just had to trust. The first thing we talk about in the program is respect, and that’s how you earn respect.”

When it came to learning the basics of the game, Yagen was treated like any other player. “I was never pulled aside or did anything separately. I kind of just integrated with the team. When we were doing drills, I’d be near the end of the line so I could watch people do it and learn from there. But I never had special treatment, and I picked it up.”

Specifically, Yagen mentioned senior Sam Randal as a teammate who helped him learn the ropes. “[Randal] has been really responsive and open, and when I asked questions, he would always explain the concepts. I’m really grateful for that,” Yagen said.

“He clicked with the team right away,” Randal said. “He always worked hard, so he was able to pick up things really quickly. I helped him with catching and running routes, as well as understanding the playbook.”

That playbook is complicated, including roughly 50 offensive plays the team may call. After practicing for weeks, Yagen remains humble and admits his lack of knowledge in certain areas of his game. “There’s still a lot of technical stuff, and I’m a little bit behind. […] I still don’t understand a lot of the stuff about our defense which has been the hardest part for me. But every day I’m getting better by being immersed in the playbook.”

Yagen intentionally came into the season with low expectations for the amount of time he would be on the field and would advise other first-time varsity players to do the same. “You have to come in with no expectations of anything. You can’t expect to get playing time. You can’t expect to reap all the rewards without working harder than anyone else. If you do that, you’re more likely to be happy because you won’t be disappointed if you don’t get playing time. I came in with no ego and just worked to get better, and I was the happiest doing it.”

Yagen knew trying a new sport was risky but felt that pushing himself was exactly what he needed. “If I played football, didn’t like it and quit, then maybe I should just reconsider the whole army thing. If I can’t handle football, then how could I handle that?”

Evidently, he didn’t quit and found a role on the team. “Once an idea pops into my head I get pretty stubborn about following through. Sometimes I’m a serial procrastinator, but when I’m locked in on something, I’m not gonna stop until it’s done.”