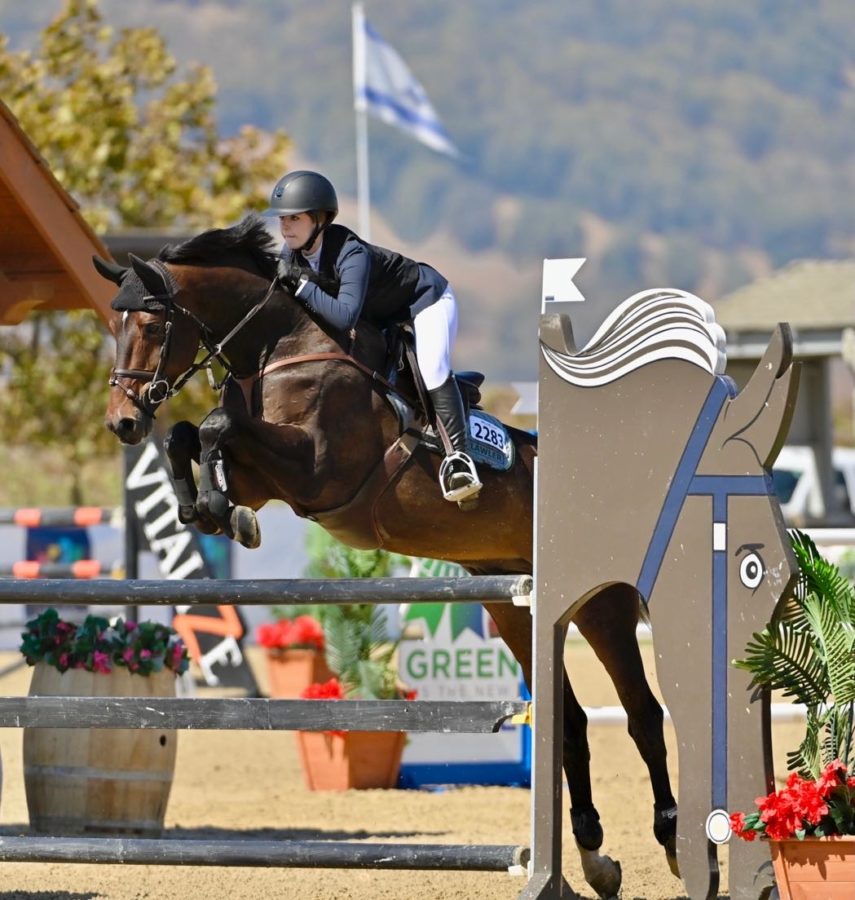 Borders and her horse take on a fence in her jumpers class. Photo courtesy of Emma Borders.

Several Menlo students are competitive equestrians and dedicate substantial amounts of time to their sport. However, they do not receive sports credit for their riding and have to fulfill the graduation requirement in other ways.

Junior Emma Borders is an accomplished equestrian, holding several titles under her belt. Borders has been riding horses competitively since she was six years old. And athough she races competitively today, she began riding because it was a fun activity to do with her sister.“Even though it was originally just a hobby, I stuck with it.”

Over time, Borders became more and more involved in the sport. Currently, she rides five days a week, dedicating about three hours each day to riding and taking care of her horses by feeding them, cleaning stalls and washing them.

Borders also competes in hunter/jumper competitions on weekends. As a hunter, she is judged on her skills as a rider. As a jumper, her speed and the number of rails she knocks down determine her placement. Sometimes the shows will occur several weeks in a row in places like Southern California and even out of state. During competition weeks, she takes Friday and sometimes Thursday off from school to travel. “When it comes to missing school, I try to communicate with my teachers as much as possible,” Borders said. “They are generally pretty understanding and let me know what I need to get done [for the class].”

Senior Laynie Sheehan competitively rides horses as well. Sheehan began riding 13 years ago in Marin and continued after moving to Woodside, California. “[Riding competitively] was one of the first things I got into when I moved here,” Sheehan said.

Sheehan is at the barn four days a week and travels to competitions all over California around 15 times a year. She competes as a hunter and recently won first place at the prestigious National Horse Show. According to its website, the National Horse Show is the oldest competition in the United States and attracts thousands of competitors from all over the country.

Despite the time dedicated to the sport, Borders, Sheehan and other equestrians do not receive sports credit for riding.

“Menlo’s legal counsel deemed equestrian [riding] potentially too dangerous. If the School gave PE credit for the activity it would be seen as endorsing the activity and if someone got seriously hurt, Menlo could be considered liable,” Athletic Director Earl Koberlein said in an email.

“I don’t understand why we don’t get credit,” Borders said. “I heard it’s a liability, which doesn’t make sense because sports like football do get credit and can be a risk.”

Because she does not have time to get credit through playing a school sport due to the high commitment hours of riding, Borders is getting credit by cross-training through online programs and SoulCycle.

Sheehan, on the other hand, plays lacrosse in the spring. “I only ride twice a week on the weekends during lacrosse season because practice is every day after school,” Sheehan said. “I’ve been able to fill the requirement, but I’ve had to decrease the amount of time I spend riding.”