Menlo Reflects on Jan Chandler’s Impact on the Community 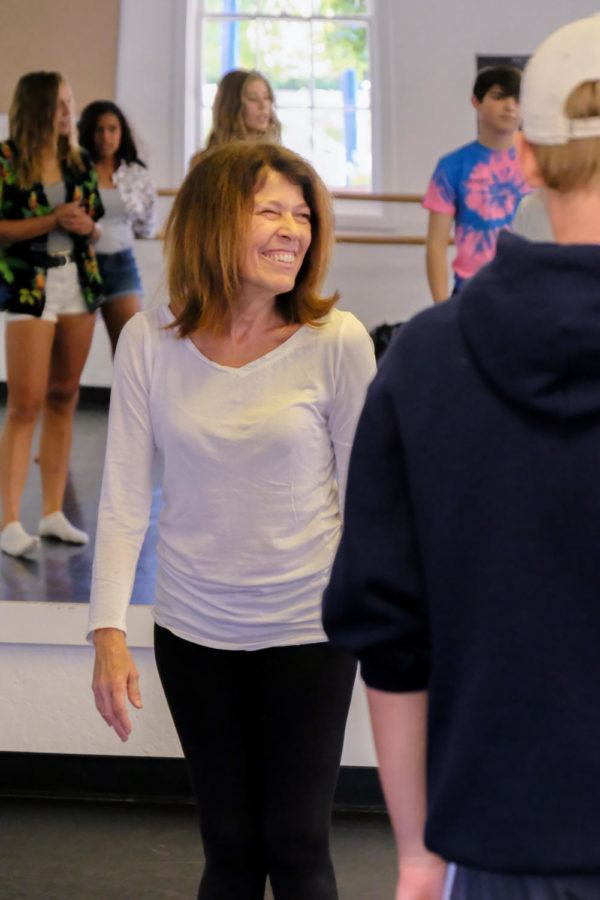 Jan laughs as she teaches dance to freshmen in Aug. 2018. Photo courtesy of Pete Zivkov

In January, Jan Chandler, who was a dance teacher at Menlo for 38 years and the founder of the dance program, passed away. Jan, who was a friend and mentor to many in the Menlo community, left a lasting impact on many faculty, students and alumni.

Alex Perez first came to Menlo in 1992 as the drama teacher and began working with Jan on the school shows, as well as on the annual benefit. “We were really like brother and sister. We were super, super close,” Perez said. “She was like an extension of my family.”

Perez recalled doing a complicated musical that involved tap dancing one year with Jan. “This one student got so frustrated, took his shoe off and threw it at the wall, and it stuck in the wall of [the old auditorium],” Perez said. “Jan just went up to him and went ‘You got this. You can do it.’ And he did, and we won the [American Musical Theater of San Jose Bay Area High School Musical] award for best musical in the area.”

According to Perez, Jan often was encouraging those around her. “She could make anybody feel good about what they were doing. And she knew that things are hard and you could get frustrated, but she always encouraged [people] to keep going. That’s […] what I loved about Jan and [also] that we would just laugh a lot together. Jan and I spent a lot of time laughing,” Perez said.

Perez’s daughter, senior Sophie Perez, met Jan at a very young age. “[She knew] me since I was born,” Sophie Perez said. She first knew Jan as a friend and colleague of her dad’s. “My first memory of her was being the dance teacher to older kids that I looked up to,” she said.

Sophie Perez began to get to know Jan more when she was a freshman, took a Menlo dance class and joined one of Menlo’s dance teams, the Knight Dancers. Over time, the two got to know each other very well. “I think that Jan was the person that I could come to at school when I needed somebody to cheer me up and talk to. She was a really helpful individual for me to have, kind of as a friend and as a mentor on campus,” Sophie Perez said.

Sophie Perez said that Jan taught her to dance more confidently. “She always told me to dance unapologetically and be big and take up space. I think she helped my confidence as a dancer and was just a very motivating teacher,” she said.

Director of Creative Arts Steven Minning first met Jan when he was interviewing for a job at Menlo in March of 2013. “She was the first teacher I really connected with. And from that moment on we became more than colleagues. Not only because we worked closely together putting together the musicals, but because of the similarities of our beginnings. We both began our professional careers as [dancers] and it was because of that that we had an immediate connection,” Minning said.

Minning and Jan grew to be close friends. “I immediately felt connected to her. It was so wonderful to find a person at Menlo who had the same sensibilities and understood the professional world. We had the same artistic values and by realizing that, she made me feel less alone,” Minning said.

Dance teacher and Menlo alumna, ‘07, Angela Curotto-Pierson first met Jan when she was a freshman at Menlo. “We used to joke about it. I had the audacity to come audition for Knight [Dancers] and MidKnights, but I wasn’t in dance class, and I didn’t know that was a rule. So she was like ‘What is this girl doing?’” Curotto-Pierson said.

Following her freshman year, Curotto-Pierson decided to start doing dance at school. “Dance was like the thing I was doing with Jan every year after that in high school,” she said.

Once Curotto-Pierson joined dance at Menlo, she and Jan became very close. “Jan wrote my college recommendation; she was like my dance mom. We were super close,” she said. When one of Jan’s daughters, Courtney, who teaches dance in the Middle School, was on maternity leave in 2017, Curotto-Pierson got the job to substitute for her. “Jan and I got to start being colleagues,” she said.

One of Curotto-Pierson’s favorite memories of Jan happened during the Menlo production of “Bye Bye Birdie.” “Those nights out on the quad were so long during tech, and you just become delirious in a funny way sometimes. We were on stage — me, Jan and Evanne [Barcenas] — and were trying to figure out this choreography. And we were just laughing because we were just delirious and delusional,” she said.

Curotto-Pierson believes that she learned a lot from watching Jan teach. “I think I learned just how empathetic she was, how much she listened to everyone, how much she created the [dance] room as a safe space to be,” Curotto-Pierson said. “Having the space of the dance room be like a safe space on campus for anyone, dancer or non-dancer. And I think that also that feeling carries on within the classes as well. That support and just knowing that anyone could come here if they need a trusted adult to talk to.”

Senior Tucker Gold first met Jan during the production of “Oliver” when he was in eighth grade. “[Dance is] more fun when you’re having fun, and I think Jan made it that way,” Gold said.

Jan was also the teacher of the first freshman rotation class that Gold went through. “We were super annoying freshmen, constantly messing around. But she was pretty patient and she still made it so we could do what we wanted,” he said.

Gold recalled a time when Jan made him feel comfortable in her room as a time that helped him know he wanted to be part of creative arts at Menlo.

Gold also cited learning the choreography in “Bye Bye Birdie” as another one of his favorite memories of Jan. “It was just a fun combination, and doing it on stage and getting to see Jan be so proud and happy of it, that felt really good,” he said.

According to senior Sammie Floyd, she learned a lot about dance in the classes she took with Jan. “I learned a lot of dance history from her, a lot of Fosse and a lot of technique, which is very valuable,” Floyd said. “She was very straight to the point and just loved to talk about her past, her career and give life lessons.”

“She definitely was a teacher who I was like ‘I could definitely go to Jan.’ We were able to talk to her very candidly about what was going on in our lives and kind of just like general advice. [I] kind of talked to her like she was a friend, almost,” Floyd said.

Braedon Young, ’19, initially got to know Jan from being in her advocacy. “I think we were the most family-like advocacy at the school. […] We had a lot of times when we would really talk about what was going on and it was kind of group therapy sessions sometimes,” Young said.

According to Young, most people in his advocacy either participated in athletics or the drama program. “I think Jan really was the perfect person to bring those two groups together and sort of cultivate the friendships that came in there,” he said.

Young remembered a time in school where he was struggling with stress, and how Jan was there to help. “[Jan] was right there. She would go and talk to everyone that needed to be talked to. She was like the prime example of an advocate,” he said.

Young described Jan as a ‘motherly friend’ figure. “[She was] someone who you [could] go to for support. But also [she] would be able to give you loving criticism if you needed it. So she was a good balance of everything for a support person on campus,” Young said. “There [are] very few teachers at Menlo who I had quite as much support from as Jan […] She’s definitely one of those people that I really cherished at school.”

“I learned from Jan the importance of balance. She raised three daughters, helped with the granddaughters, took care of her mom and still had time for each and every student. She worked really hard but her family was her center. She made everyone feel cared for. She always made time for them,” Minning said.