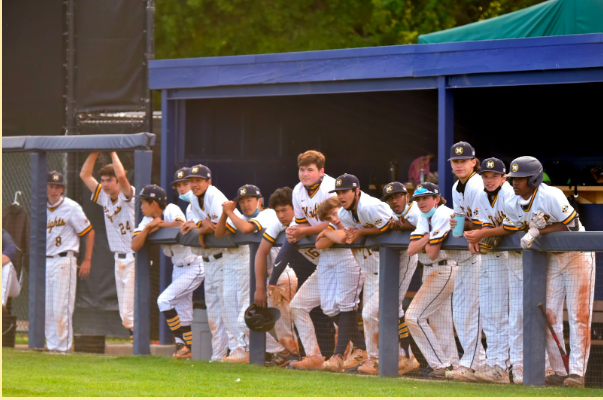 Menlo Boys Baseball had a disappointing 2021 season that was altered by COVID-19. However, they have been red hot during this turn around season. Photo Courtesy of Chi Nguyen.

Last year, the Menlo varsity boys baseball team hardly had enough players to field a team. Other sports were pushed back to the spring due to COVID, which jeopardized the program. This year, the tides have turned. Led by head coaches Tink Reynoso and Greg Hart, Menlo already has big wins over Menlo-Atherton, Half Moon Bay, and its rival Sacred Heart Prep.

So far, the varsity baseball team has tripled their wins this season compared to last year’s 2-17 season. Led by their captains, Jack Geisler and Chase Hurwitz, the Knights are looking to build a special season this year.

The team is led by four seniors, captains Geisler and Hurwitz, along with Max Pena and Eric Young. Junior Jake Bianchi is confident in the team’s leadership. “The seniors on the team, especially the two captains, Jack Geisler and Chase Hurwitz, have really stepped up into a leadership role this year,” Bianchi said. “They have made a lot of teammates better.”

After the win, the Knights moved to 5-3 in League Play. Dhaliwal weighed in on the season. “All of our wins this year have been amazing team efforts,” Dhaliwal said.

“When our hitters haven’t performed well, our pitching has stepped up,” Dhaliwal said. In a game that showcased their defense, the Knights won a 3-2 nail-biter against Half Moon Bay. On the flip side, “When we’ve had rough outings pitching-wise, our offense has picked us up,” Dhaliwal said. The offense showcased its firepower in an 8-6 win over SHP and a 14-7 win over Milpitas.

The Menlo Boys Baseball team has had a bounceback season after a rough patch during the pandemic. It’s been a season full of excitement, highlighted by back and forth games. The leadership of the program is strong with a mix of coaches and players. The team looks to continue their success throughout the final stretch of the season.