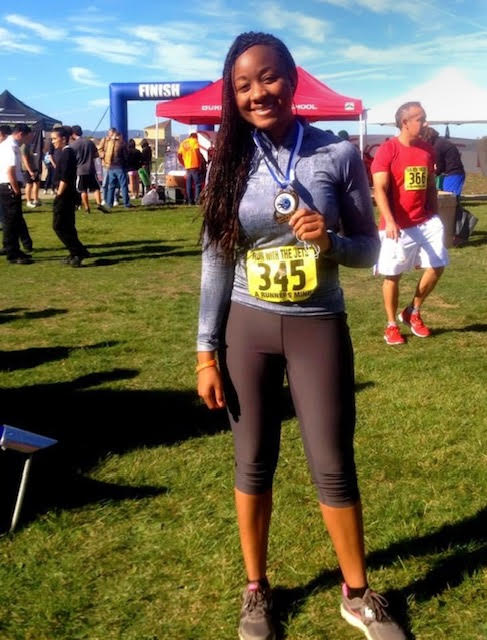 Menlo history teacher and Affinity Group Coordinator Saletha Okunnuga was a multi-sport athlete in high school and coached cross-country at her old school before the pandemic. After being quarantined for months, Okunnuga rediscovered her passion for running and found that it provides her with a mental escape.

Okunnuga has run three half-marathons and one full marathon with her first two half-marathons being completed before the pandemic. She picked up running again because she had free time and felt safe running outdoors. “Running outdoors helped hold me accountable to get out and be active,” Okunnuga said. She found it enriching to get back into running during the pandemic and return to participating in marathons. “I love the idea of preparing for something, training for a specific goal, and seeing that work pay off,” Okunnuga said.

Okunnuga prioritizes running races in her favorite destination, in San Francisco or by the ocean. On Nov. 13, 2022, she ran the Monterey Bay Half Marathon and is planning on running the Napa Valley Women’s Half Marathon in March 2023. Participating in year-round races is strenuous on her body, so she typically trains for 15 weeks and goes through a gradual buildup in mileage.

A typical day in Okunnuga’s life begins each morning at 4:30 a.m. with walking her dog, and working out until 6 a.m. Shortly after, she wakes her kids up, makes breakfast and heads to Menlo to teach. To keep a consistent sleep schedule, she eats dinner and enjoys family time before going to bed by 9:00 p.m. Despite her busy schedule as a teacher and mother, maintaining a steady training schedule “hasn’t been difficult at all” and has improved her mental health to make her a “better teacher and mother.” Okunnuga also emphasizes how working out in the morning helps her feel clear-headed and energized throughout the work day and at home.

Okunnuga’s running has also increased her ability to spend time with her family because her children occasionally ride their bikes alongside her runs. Although Okunnuga loves running leisurely in the summer, she balances her training with her busy work life. “Knowing I have a deadline keeps me motivated to make sure I make time for training to have a good race,” Okunnuga said.

Okunnuga believes working out has helped her form a feeling of community and find a new platform of support since she is relatively new to the area. “Through social media, I have joined the ‘Black Peloton Riders Community,’ which has been a supportive platform,” Okunnuga said. Although she typically runs alone, she ran the San Francisco Half Marathon with a friend and loves to meet new people during races and on training routes.

Okunnuga says her primary motivator is simple: her two sons. Through running and other forms of exercise, she hopes to ensure that she is healthy and can be around for her kids for a long time. “I get motivation from my kids seeing me committing to something each day and having it pay off in the long run,” Okunnuga said. She hopes to inspire her kids to create goals in life and set steps to achieve those goals.

Another motivator is her performance on her runs. Okunnuga remembers having races where she didn’t do as well as she sees these moments as motivation to do better in the future. “When I prepare, the challenge of a marathon is overcome more leisurely,” Okunnuga said.