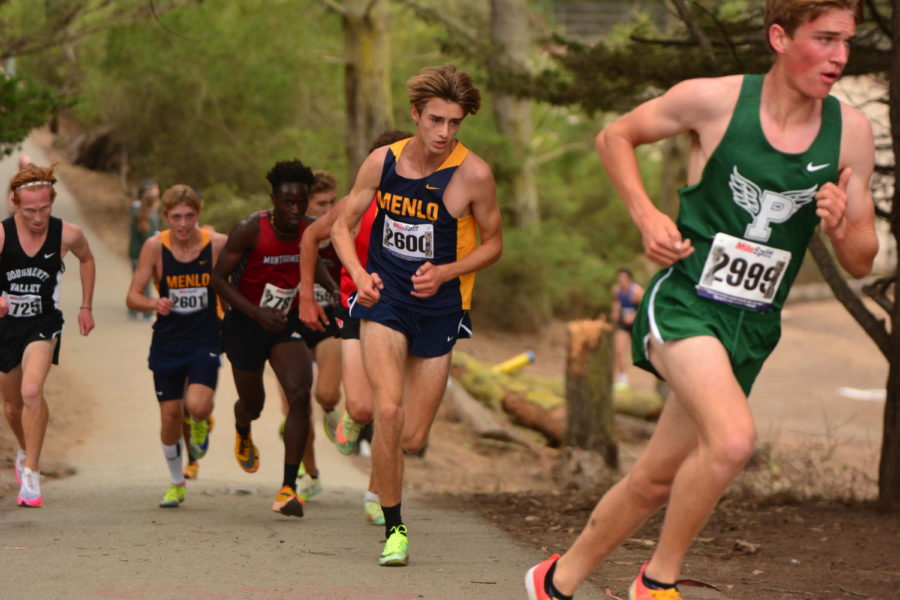 Justin Pretre (center) runs at the Lowell Invitational, with Landon Pretre (left) shortly behind. At the end of the 5k, Justin and Landon Pretre placed first and second, respectively, out of 300 runners. Photo courtesy of Steve Pretre

The Menlo cross country team opened their season with an impressive performance at the Lowell Invitational, a cross country event with over 80 schools hosted by Lowell High School in San Francisco. Boys’ varsity runners senior Justin Pretre and sophomore Landon Pretre placed first and second, respectively. With over 300 runners in the boys’ varsity race, it was an exciting win for not just the Pretre brothers, but for the entire team. “Winning an invitational in cross country is a rare occurrence,” Justin Pretre said.

In the fall of 2021, both the boys’ and girls’ varsity teams placed well in their divisions. The boys’ team finished seventh in the state in Division IV, the highest finish for the team in school history. The girls’ team also had an impressive run, finishing fourth in CCS.

“Last year was awesome. I started the cross country season, and I didn’t really have many expectations going into it,” sophomore Landon Pretre said. “I accomplished a lot more than I expected.”

In addition to Landon Pretre, both the girls’ and boys’ varsity teams have some high-scoring underclassmen. Freshman Ariya Kaushek consistently runs some of the fastest times for the girls’ varsity team, despite having only recently started running competitively.

“[Being a freshman] makes me more excited [about cross country] because there’s really a lot of time to develop a deeper community [on the team] and more talent,” Kaushek said.

According to Head Coach Jorge Chen, it is difficult to compete at the level Menlo is, considering it is a smaller school. “Both varsity squads are putting Menlo cross country on the national map,” Chen said.

According to Hoka Postal Nationals, the boys’ varsity team is currently ranked 18th in the country and 6th in state; the girls’ varsity is 40th in the nation and 8th in state.

Senior Justin Pretre believes that being a smaller school changes the mentality of the team. “We see ourselves as more like an underdog type team. […] We’re really tight knit, we’re all really good friends,” Justin Pretre said.

Because the team is so small, seniority is not necessarily prioritized, and the teams have a fair amount of underclassmen. The girls’ varsity team rosters six underclassmen out of seven total runners. “On a lot of sports teams, you’ll see that the underclassmen don’t have much power,” Landon Pretre said. “n such a small team, everyone is equal.”

All four teams within the program practice together daily, creating a real sense of community with runners from all levels. Even though each team has separate workouts, they all run together. “I really like that we always start together and we end together,” Kaushek said.

This year, the team hopes to build on its success from last season, including both boys and girls varsity attending the state competition at the end of the fall. The teams are now in Division V, which according to Chen, increases the chances of them doing well at the state championship. “Our girls team will finish better in [Division V] compared to [Division IV], while our boys will probably have the same chances whether in [Division IV] or [Division V] to podium at State, if not winning it,” Chen said.

The program is highly competitive and carries lofty expectations, which can lead to stress for the runners. However, Chen tries to remind the team to “enjoy the journey” during the season. “Sports are supposed to be fun, and not to add another pressure in your daily life,” Chen said.