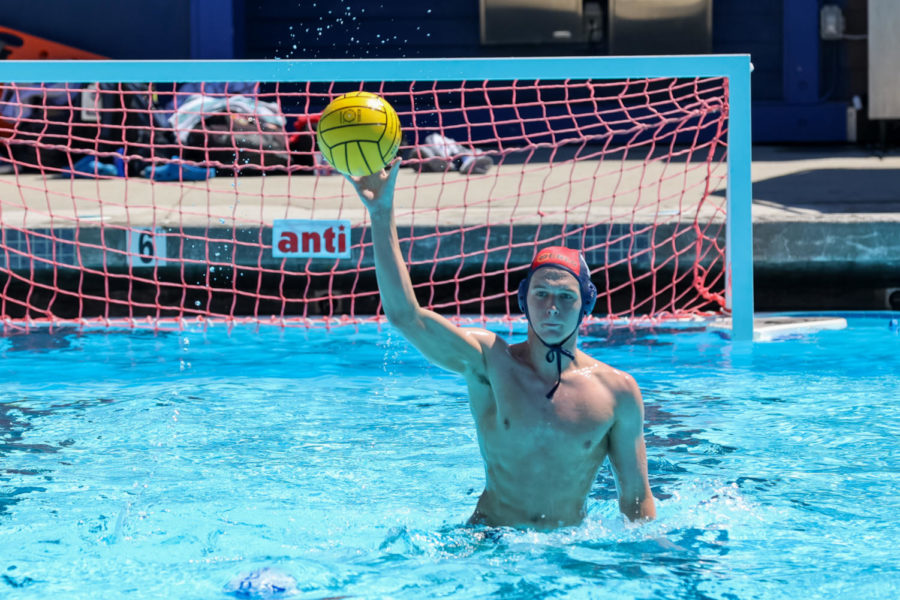 The boys began the season with a disappointing result against Miramonte High School. Despite an eight goal deficit during the second quarter, the Knights stepped up their energy in the second half to tie the game. Junior Cormac Mulloy stopped the Miramonte offense by letting in only three goals, while the Knights put 10 points on the board. In the final seconds of the game, Miramonte scored again to halt a come-from-behind victory, and win 14-13.

Despite the game going down as a loss, Head Coach Jack Bowen saw the result as a positive. “[Miramonte is] the number two team in all of Northern California and we beat them in the second half by a large margin,” Bowen said. “It would have been understandable for them to give up and not go for it. But, instead, we made some changes; they adapted to the changes and we came back.”

The close defeat left the Knights with a chip on their shoulder to prove themselves in future games. The team blazed through their schedule and racked up six consecutive wins, including an away game against the previously-undefeated Saint Francis team. “We were down by three goals after the first quarter, but we came back to win the game,” Bowen said. “To be at their place and play three good quarters of water polo was great for us.”

The winning streak ended during the Roche tournament. After three victories, the boys fell to La Jolla in the championship game 15-10. “La Jolla was really strong and looked like a college team to me,” Bowen said. “However, I was really happy with our wins in the first three games. It was a great tournament for us.

In a weekday matchup against Saint Ignatius, the Knights got back on track by defeating the Wildcats. This momentum helped them in the following week’s game against Bellarmine.

Despite losing to Bellarmine in two important playoff games last season, the Knights emerged with a 11-9 victory. “We were down one of our starters [Jackson Kay], but we came out big and were able to get a win there,” senior Tommy Kiesling said. Kiesling had three goals in the game.

“That was one of the most intense games I’ve ever played,” senior Gabe Stankovich added. “Our win was a big upset.”

Coming off of a big league win against the Bells, the Knights headed down to Southern California to play in the S&R Tournament. The boys lost their first game against Long Beach Wilson by three goals and their second against Mira Costa by one goal in double overtime. In their second two games, the teams found their rhythm again, defeating Irvine and Stevenson. “The tournament was disappointing, but other than those losses, everything has been going well recently,” Kiesling said, “We’re definitely hoping to win the Central Coast Section or the West Catholic Athletic League this season.”

Looking forward to the rest of the season, the team looks to continue to add to the win column. “The chemistry of this team is amazing,” Stankovich said. “It’s a really fun group of guys.”