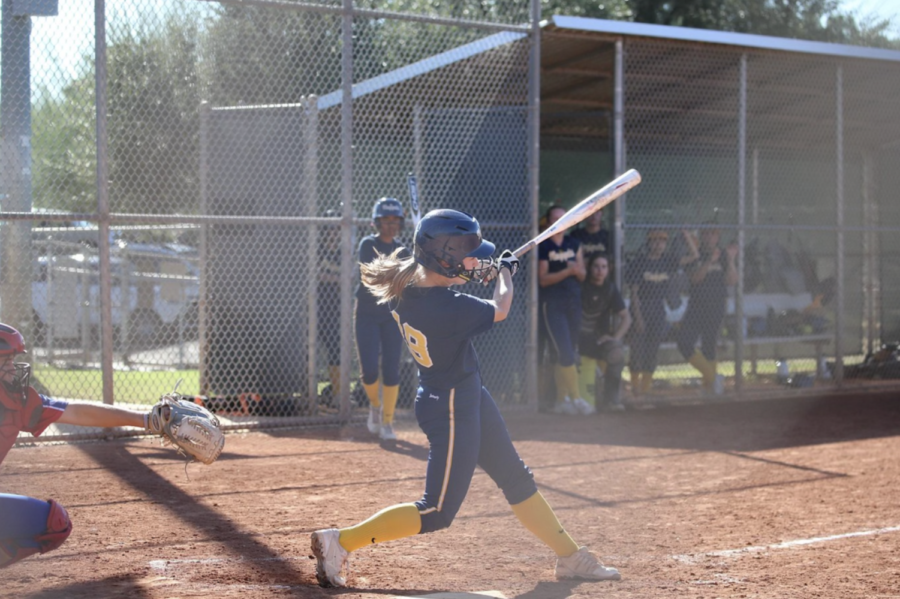 Barkely hits a ball at her softball tournament with the Cal Nuggets. Photo Courtesy of Helen Barkley

Once a student-athlete chooses their high school, everything else is essentially set for their athletic career: schools cannot recruit athletes to their high school and some schools don’t offer specific sports. For senior Helen Barkley, her main sport, softball, is not offered at Menlo.

Barkley has been playing softball for 12 years. She played recreationally until she was 11 and eventually at the national level. Currently, she plays club softball for the Cal Nuggets club, an elite program that was recently ranked in the national top 20 according to a recent poll on Fastpitch club rankings. Barkley competes against some of the best teams in the country, raising her game and garnering exposure in the recruiting world. “I would love to play in college, that is kind of the whole reason for playing for such a good team,” Barkley said.

The high pressure and competitive nature of softball is what made Barkley fall in love with the sport and is what makes her want to continue playing. “I love when it’s the seventh inning and you’re down by one. Those are the kind of moments when everyone gets hype.” She also feels that, despite high pressure situations, her teammates are always supportive of each other. “Even if you make a mistake or strikeout, [your teammates] still know that you’re a good player.” The support she feels from her teammates allows for the expectations of a high level team to be manageable.

Aside from competition and spirit, Barkley loves spending time with her teammates at travel tournaments and showcases. “Last year during one of our tournaments, we had a day off and we went to the beach as a team. It wasn’t softball but I love being able to travel with the team and it’s good to have a group of friends outside of school,” she said.

Barkley’s love for the sport continues to fuel her drive to improve as an athlete and work even harder. “Especially in this past year, I’ve started lifting more seriously and practicing regularly, and I’ve seen that pay off in hitting better and being a better player, which is always rewarding to see.”

Due to lack of interest in the program, Menlo has not fielded a softball team since 2015, so Barkley plays soccer and runs track for Menlo. Being able to play other sports for her school makes not having softball more manageable. In addition, Barkley is fine not having softball because she does not feel that the level of play would be very high due to not very many people playing the sport at Menlo.

However, the recognition that other athletes get for playing their main sport for their school makes her sad that Menlo does not have a program. “I see everyone get Mercury News awards and nominations for how well they play for their high school and their classmates can understand what a great athlete they are. […] Not getting those same opportunities can be a bit of a bummer.”

As mentioned, Barkley plays soccer and runs track for Menlo. She loves getting to be a part of the Menlo athletics community through track and soccer. Barkley used to play club soccer until she had to quit in order to prioritize softball, so her Menlo seasons are the only time she really gets to play soccer anymore, which she is very grateful for. Even so, softball is her priority. “It’s not as fun when you’re not ‘the best,’ but I like being a part of the athletic community and being on the [soccer] team is something I have really enjoyed.”