Debutante Balls Provide Girls an Opportunity For Service and Community 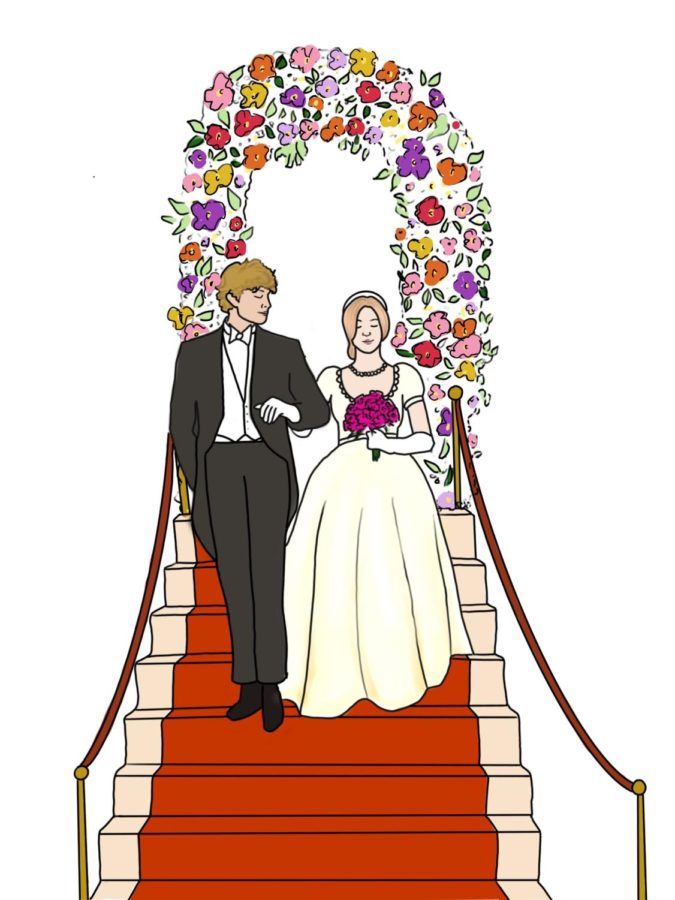 From 49.1 Print Edition: Today, debutante balls are centered on ensuring their debutantes volunteer for the required hours at local philanthropies and that the balls themselves are large-scale fundraising events. Staff illustration: Dorinda Xiao & Michele Hratko

White pearls, white gloves and white gowns; debutante balls are traditional events where grace, elegance and coming of age synthesize. Originating from the noble roots of Queen Charlotte of Great Britain in 1780, where young ladies were escorted and presented to the royal court, debutante balls have become a high-society event for young women and their families. Designed to showcase a young woman’s “debut” into adulthood, debutante balls act as a high society “coming out” while simultaneously being a charity event. Debutante balls present the young ladies individually by announcing the money that each girl raised for her chosen charity, followed by a ballroom dance led by her escort and ending with a fabulous dinner before her “final curtsy.”

Traditionally, debutante balls have taken conservative stances on gender and class. However, they have evolved from their monarchical and aristocratic roots. Today’s young women have reframed the ball’s purpose by shifting its focus to fostering a community among young women, devoting time to charity and celebrating teen maturity into adulthood.

The New York Times article, “The Debutante Ball in The Age of Instagram,” emphasizes how debutante balls today juxtapose the ball’s elite stereotypes. “You think of it as a way of being brought into society to find your man, to be married off,” Christine McCabe, a former debutante in the Viennese Opera Ball, wrote. “But that’s no longer what it is. That is a very antiquated interpretation of the event. In this day and age, it’s almost a way for young women to show themselves and what they’ve accomplished.”

The negative assumptions that surround debutante balls stem from their elitist origins. However, debutante balls aren’t as exclusive as they used to be. Vogue’s article “Jean Paul Gaultier Takes Vogue Inside The Exclusive Debutante Ball In Paris” interviews True Whitaker, a Black woman from New York University, on Le Bal des Débutantes in Paris, which she is preparing to attend. “What’s beautiful now is that it’s a mix of countries. Before it was only French, and now there are people from India, America, Greece… It’s not completely retro, it shows the globalization of people,” Whitaker describes, revealing the increase in diversity of countries and cultures that now come together to participate in the debutante ball.

Furthermore, being a debutante is no longer forced upon women. Young women can deny and accept the invitation, with no consequence for a decision not to attend. Debutantes have also been given significantly more freedom: today, debutantes are not always required to take a date, and same-sex dates are allowed. According to YahooNews Australia, Cindy Hou, director of the Melbourne Debutante Ball, states, “We live in the 21st century, we no longer need to live in the tradition of only having female/male partners to accompany the other gender,” highlighting the debutante ball’s shift from tradition.

In the Menlo community, several Menlo seniors participate in the Peninsula’s Debutante Ball and are excited about the opportunities the ball provides for both philanthropy and community building.

Senior Caitlin Crocker accepted the invitation to be a debutante. “I am choosing to take part in the debutante ball to connect with a wide range of girls in my area,” Crocker said. After serving six years as a member of the National Charity League, she feels the debutante ball is a continuation of her philanthropy work. “By the time of the debutante ball, we all [will] have graduated NCL. I think the ball will allow me to continue volunteering in my community,” Crocker says.

Today, debutante balls are centered on ensuring their debutantes volunteer for the required hours at local philanthropies and that the balls themselves are large-scale fundraising events. Atherton debutantes are required to perform four hours of community service. According to Mercury News, over the past 52 years, the Peninsula Debutante Ball foundation has donated $4 million to various humanitarian organizations.

Senior Madison Vitro chooses to be a debutante because it provides an opportunity for connection. “The ball will be the last event that emphasizes strengthening bonds with all of my girls before we go to college,” Vitro said. Vitro also explained that she thinks the debutante ball will allow them to celebrate one another. “It will make us more excited to enter adulthood and for all of the opportunities in front of us.”

Debutante balls are no longer meant to suppress women into traditional gender confines. They are a celebration of womanhood and the accomplishments of the debutantes’ throughout their teenage years. Society needs to recognize debutante balls’ positive impact on offering opportunities for young women and emphasizing the value of community service.