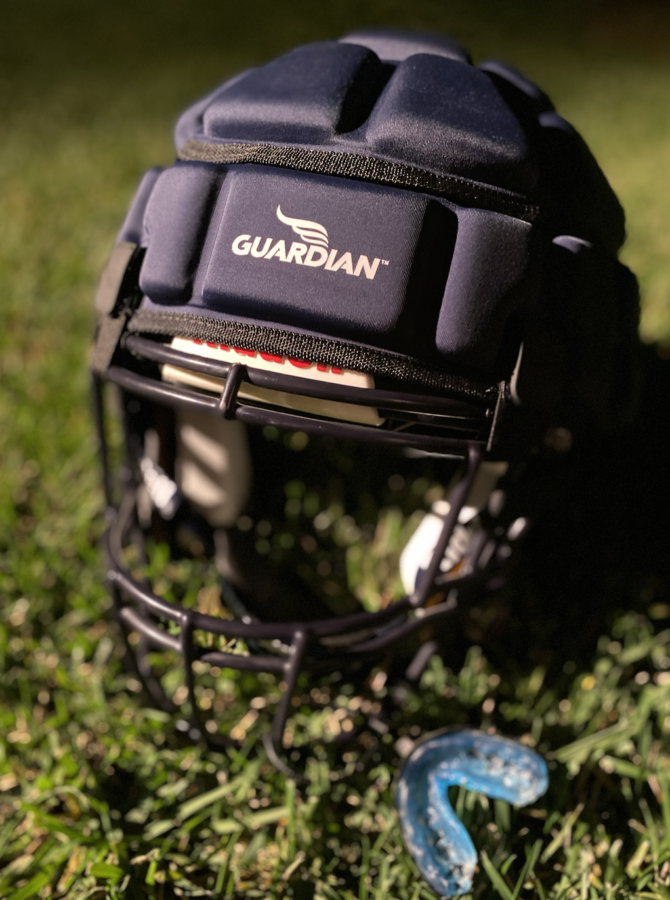 The decision to start offering the caps came after the NFL started requiring them for linemen, linebackers and tight ends up until the second preseason game. Within those positions, the frequency of concussions dropped 50% compared to previous years. Staff photo: Andrew Levitt

The varsity and JV football programs used new padded shells for the first time this season during practices in an attempt to reduce the risk of head injuries. The protective headgear was optional for all players but was highly recommended by the coaches.

These “Guardian Caps” shot up in popularity after they made their first appearance in the NFL this past summer. NFL players that face frequent contact to the head used them last offseason during summer practices to lower the risk of head injuries.

Guardian Caps are strapped onto the facemask and wrap around the outside of the helmet to act as an extra layer of protection. Many Knights used them during practice, but they are not allowed during games.

The option for players to start using the helmet caps came this year after Director of Athletics Earl Koberlein and the football coaches decided to implement the new equipment.

Head Athletic Trainer Aubrey Fennell believes that there is not enough evidence to show that the caps help reduce head injuries. “You can go to their website, and it actually cannot say on there at all that it helps to reduce the risk of concussion,” Fennell said. The Guardian Caps official website describes many benefits to wearing the caps like helping to preserve the wear and tear on the helmet, reducing the temperature of the helmet and quieting the sound of hits. However, the company does not claim that the caps lower concussion risk.

Furthermore, Guardian Sports lists a disclaimer to players on their website. “No helmet, practice apparatus, or helmet pad can prevent or eliminate the risk of concussions or other serious head injuries while playing sports.”

Fennell worries that there is a misunderstanding regarding the effectiveness of the pads. She thinks the helmet caps give the players too much comfort while playing football. “I think that there is a false narrative that [the caps] helped do something that they actually don’t help do,” Fennell said. “I don’t want people to feel like, ‘oh, this is helping reduce my risk of concussions’ when it’s actually not.”

The decision to start offering the caps came after the NFL started requiring them for linemen, linebackers and tight ends up until the second preseason game. Within those positions, the frequency of concussions dropped 50% compared to previous years.

Packers linebacker De’Vondre Campbell, who was forced to wear the caps during practices, reiterated what his coach, LaFleur, said. “I think it’s stupid,” he told NBC Sports Washington. “The minute we take them off, we’re going to be so used to hitting with them. It’s going to feel a lot different.”

A study conducted by the National Library of Medicine found that the Guardian Caps did not significantly alter the impact on the helmet. The study used the Gadd Severity Index to measure the impact on helmets from different heights. It found that when dropped, both the helmet with the cap and without it absorbed no significant difference in force on the helmet. “The Guardian Cap did not alter impact severity on a helmet drop-testing battery,” the study recorded.

Junior Brady Jung plays on the varsity football team and likes that the team used the Guardian Caps during practice. He explained that many drills involve head-to-head contact, so he believes that any additional protection will benefit the team. “You can definitely tell the difference between striking with and without the extra pads,” Jung said.

Jung also added that keeping the Guardian Caps on during practice allows players to really work on technique when tackling. “I’m more confident in each hit,” Jung said. “Just having that extra sense of competence really just helps.”

The fact that Jung is more confident on each hit connects back to Fennell’s point. She emphasized that players fall into a false sense of security. If Fennell’s hypothesis is correct, the caps could do more harm than good.

Menlo’s JV football team used the caps at the end of summer before the season started. Once the season got underway, players generally stopped wearing the caps, and coaches didn’t seem to mind.

JV football head coach Noah Lubarsky maintains a neutral stance on using the helmet caps. “They get their own choice to do whatever is more comfortable,” Lubarsky said. Most Varsity players decided to wear them due to heavy influence from the coaching staff.

JV football player Carter Techel didn’t mind that the team didn’t wear them. “I guess when we are doing helmet-to-helmet drills the hits hurt a little less but nothing substantial,” Techel said. He added that if the choice was up to him, the team would not wear them.

Lubarsky thinks very similarly to Fennell in that he doesn’t want his players to feel too secure when wearing them. “I have heard that those who do wear them tend to almost get a little comfortable, and so that could be a bad habit that transfers into the game,” he said.